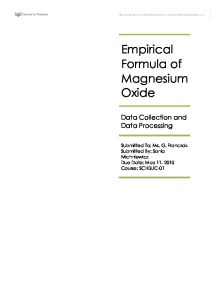 Empirical Formula of Magnesium Oxide Data Collection and Data Processing Submitted To: Ms. G. Fronczak Submitted By: Sonia Michniewicz Due Date: May 11, 2010 Course: SCH3UC-01 Design Purpose: To determine the empirical formula of Magnesium Oxide Independent Variable: amount of oxygen available Dependent Variable: amount of magnesium oxide produced Controlled Variables: Heat of the flame, height of the flame, room temperature, mass of magnesium strip, and the same electronic balance were some of the controlled variables in this experiment. For all the trials that were conducted, the gas valve and the needle valve were not altered which kept the flame consistent- intensity and height. Since the whole experiment was completed during one period and in the same room the room temperature remained the same. 10cm�0.1cm of magnesium strip was measured for each trial and the mass each time was around 2.0g�0.1g. The same electronic balance was used to minimize the error. ...read more.

Calculate the moles of Mg present magnesium oxide 16. Determine the mole ratio 17. Determine the average mass of the magnesium oxide 18. Determine the percent composition of magnesium oxide Data Collection Raw Data: Magnesium ribbon: before the ribbon was cleaned it was malleable, coarse, a little shiny, but after it was cleaned with the steel wool it remained malleable but became smooth and very shiny. Magnesium oxide: after the reaction had occurred in the crucible magnesium oxide formed into a dull, white, clumpy powder which had grey and black patches and resembled a coil shape The reaction: when there was actually a reaction the content inside the crucible began to glow an orangey red shade and towards the end of the reaction white opaque smoke was escaping. This table is the recording of the measurement obtained throughout the lab Trial Number Mass of crucible and lid (g) ...read more.