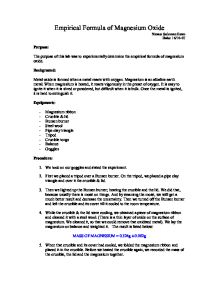 Empirical Formula of Magnesium Oxide Name: Suleman Esam Date: 16/10-07 Purpose: The purpose of this lab was to experimentally determine the empirical formula of magnesium oxide. Background: Metal oxide is formed when a metal reacts with oxygen. Magnesium is an alkaline earth metal. When magnesium is heated, it reacts vigorously in the preset of oxygen. It is easy to ignite it when it is shred or powdered, but difficult when it is bulk. Once the metal is ignited, it is hard to extinguish it. Equipments: - Magnesium ribbon - Crucible & lid - Bunsen burner - Steel wool - Pipe clay triangle - Tripod - Crucible tongs - Balance - Goggles Procedure: 1. We took on our goggles and stated the experiment. 2. First we placed a tripod over a Bunsen burner. On the tripod, we placed a pipe clay triangle and over it the crucible & lid. 3. ...read more.

Errors The mole of magnesium and oxygen was not the same. I found out that the mass of oxygen was smaller then it was supposed to be. This error can have occurred by three things: 1. We did not found out the empirical formula for magnesium oxide properly; because magnesium also reacted with nitrogen. It takes three magnesium atoms, while it takes only two nitrogen atoms to form a compound. Nitrogen is also lighter then oxygen; thus our combined mass after the reaction became smaller then if the magnesium had totally reacted with oxygen. 2. When we lifted the lit while magnesium ribbon was reacting, we let out smoke. That was magnesium oxide in vapour. 3. There is a possibility that maybe not all of the magnesium reacted. Improvements: If we had carried the experiment a little more, we could have removed the magnesium nitride. By adding some drops of water and then heating it up, we will get this formula: Mg3N2 + 6H2O � 3Mg(OH)2 + 2NH3 The result will be ammonia gas, which will depart when heated. ?? ?? ?? ?? ...read more.