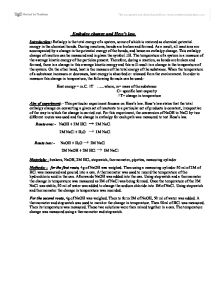 Enthalpy change and Hess's law. Introduction: Enthalpy is the total energy of a system, some of which is restored as chemical potential energy in the chemical bonds. During reactions, bonds are broken and formed. As a result, all reactions are accompanied by a change in the potential energy of the bonds, and hence an enthalpy change. This enthalpy change of reaction can be measured and is given the symbol H. The temperature of a system is a measure of the average kinetic energy of the particles present. Therefore, during a reaction, as bonds are broken and formed, there is a change in this average kinetic energy and this will result in a change in the temperature of the system. On the other hand, heat is the measure of the total energy of the substance. When the temperature of a substance increases or decreases, heat energy is absorbed or released from the environment. In order to measure this change in temperature, the following formula can be used:- Heat energy = m.C.T ......where, m= mass of the substance C= specific heat capacity T= change in temperature Aim of experiment: - This particular experiment focuses on Hess's law. Hess's law states that the total enthalpy change on converting a given set of reactants to a particular set of products is constant, irrespective of the way in which the change is carried out. ...read more.

Route two: - the change in temperature in forming 2M of NaOH from NaOH was 9.9�c. To do this 50 ml of water was added and the mass of the solution was 50 g. using the formula the change in enthalpy can be calculated as follows:- Heat change= m. c. = = 2.0 KJ Once 2M of NaOH was formed, 50ml of 2M of HCl was added to form 1M of NaCl, which is the final product. The change in temperature was 8.5�c. The mass was 100g and the change in enthalpy was Heat change= m. c. = = 3.5 KJ The sum of the two changes of enthalpy is 5.5 KJ. Conclusion: - The change in enthalpy for the formation of 1M of NaCl using route one was 2.9 KJ. Using route two it was 5.5 KJ. There is a significant difference of 2.6 KJ. This shows that the experiment done did not prove the Hess's law effectively. This may be due to certain factors that will be discussed below. Limitation: - There could be lose of heat to the surrounding environment that can have vital effect on the results of the experiment. Human error and mistake matter in this kind of experiment. Instead of using a simple thermometer appropriate can be used. Improvements:- the use of data pro logger or calorimeter can minimize the human and device error in measuring temperature and can be better than simple thermometer. Using insulator such as Styrofoam cups to prevent heat from escaping to the surrounding. ?? ?? ?? ?? ...read more.