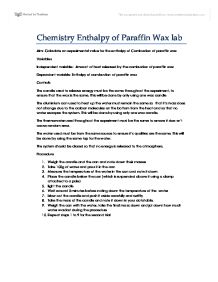 Measure the temperature of the water in the can and note it down 4. Place the candle below the can (which is suspended above it using a clamp attached to a pole) 5. light the candle 6. Wait around 5 minutes before noting down the temperature of the water 7. blow out the candle and push it aside carefully and swiftly 8. Take the mass of the candle and note it down in your datatable. 9. Weigh the can with the water, take the final mass down and jot down how much water was lost during the procedure 10. Repeat steps 1 to 9 for the second trial Datatable Trial 1 Trial 2 Initial temperature of water (c) ...read more.

Second Experimental Value for enthalpy of combustion (Kj/mol) Theoretical Value for enthalpy of combustion (Kj/mol) -10613.63 -10027.5 -13774 Reasons for difference : Improvements More trials could be done We could time the amount of time the paraffin wax candle burns to give us more even values Water was lost when removing and placing the thermometer, this could be avoided by having the thermometer in the water the whole time, but then the thermometer would absorb the heat as well. Sources of error : Some water and paraffin wax was lost to then environment during the experiment, this can not be changed. Some of the heat was escaping to the atmosphere from the candle, this could not be improved because the candle needs oxygen to burn so we could not place it in an insulated environment. ...read more.