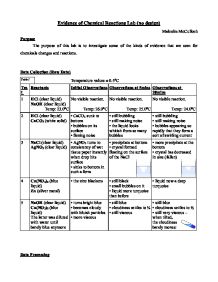 - Yes No Yes Yes No � Only measured for Test 1 � Small amounts of gas may not have been noticed Concluding The purpose of this lab is to investigate some of the kinds of evidence that are seen for chemicals changes and reactions. In accordance with the evidence presented above, it can be seen that some of the most common types of evidence are: * Heat - Test 1, for example, had no visible reaction but its temperature instantly rose 3�C as a result of the energy released from the reaction of the acid (HCl) and base (NaOH). * Bubbles - Test 2 bubbled vigorously, showing that a gas was formed as the HCl reacted with the CaCO3. * Noise - the reaction in Test 2 was so intense that it made a fizzing sound. * Precipitate - solid particles (AgCl, Cu(OH)2) are often found floating or sunken in the liquid, a product of the reaction. ...read more.

When considering the purpose, precision and detail are irrelevant. In all reality, this lab was no more complicated than it needed to be, but not too simple either. It actually needs very little in the way of improvement. A few more tests could have been added, such as another one that included a temperature change and another with noise, but also to show types of evidence that were not covered herein, such as the spark and flame that are exhibited by the reactions of alkali metals with water. Improving the Investigation Doing other sorts of measurements - viscosity, mass of precipitate formed relative to amount of reactants, opacity - would allow for greater comparison and presentation, but would not actually be necessary. Using more precise tools and doing more trials would have the same effect, but none of these actually produce more examples of types of reactions, which is the purpose of the lab. This lab could, however, be improved by performing a few more experiments, to include more evidence, such as spark and flame. ...read more.