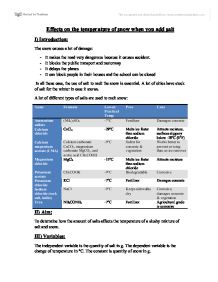 Experiment -Effects on the temperature of snow when you add salt

Effects on the temperature of snow when you add salt I) Introduction: The snow causes a lot of damage: - It makes the road very dangerous because it causes accident. - It blocks the public transport and motorway - It delays the planes - It can block people in their houses and the school can be closed In all these case, the use of salt to melt the snow is essential. A lot of cities have stock of salt for the winter in case it snows. A lot of different types of salts are used to melt snow: Name Formula Lowest Practical Temp Pros Cons Ammonium sulfate (NH4)2SO4 -7�C Fertilizer Damages concrete Calcium chloride CaCl2 -29�C Melts ice faster than sodium chloride Attracts moisture, surfaces slippery below -18�C (0�F) ...read more.

Aim: To determine how the amount of salts affects the temperature of a slushy mixture of salt and snow. III) Variables: The independent variable is the quantity of salt in g. The dependent variable is the change of temperature in �C. The constant is quantity of snow in g. IV) Method: * Collect some clean snow in a basin. * Weight out 25 grams of snows in a small insulated beaker. * Weight out 1 gram of salt (sodium chloride) in a white weighting boat. * Add the salt to the snow, stir the slushy mixture gently with red alcohol thermometer and take the temperature when it has stabilised (doesn't change any more). ...read more.

Conclusion: The table of results shows that when you had salt the temperature decreases. As the graph shows, the temperature change depends on the quantity of salt added. The salt added is sodium chloride, NaCl. When you add that salt to snow it makes ice mixture (SaH). The melting point of the snow becomes lower as more particles are added until the point where the salt stops dissolving. Normally the sodium chloride can melt ice only down to about -9�C. VII) Evaluation: I think that the method is fine. However it could have been better if the starting temperature of the experiment would have been the same. To improve the result we could have redone the experiment for each quantity of salt to be sure that the results are relevant and we could have done more different quantity, as 2.5, 3, 3.5 or 5. ...read more.