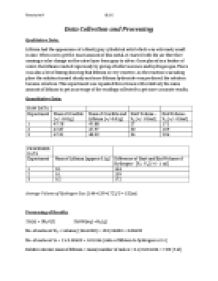 Experiment to find the relative atomic mass of lithium

ï»¿Rimsha Arif IB1-5 Data Collection and Processing Qualitative Data: Lithium had the appearance of a black/gray cylindrical solid which was extremely small in size. When cut to get the exact amount of this metal, it reacted with the air therefore causing a color change on the outer layer from gray to silver. Once placed in a beaker of water, the lithium reacted vigorously by giving off effervescence and hydrogen gas. There was also a lot of fizzing showing that lithium is very reactive. As the reaction was taking place the solution turned cloudy and once lithium hydroxide was produced, the solution became colorless. This experiment was repeated three times with relatively the same amount of lithium to get an average of the readings collected to get more accurate results. Quantitative Data: RAW DATA Experiment Mass of Crucible (+/- 0.01g) Mass of Crucible and Lithium (+/-0.01g) Start Volume – Vâ (+/- 0.5ml) End Volume - Vâ (+/- 0.5ml) 1 47.78 47.88 27 171 2 47.87 47.97 30 169 3 47.91 48.02 34 206 PROCESSED DATA Experiment Mass of Lithium (approx 0.1g) ...read more.

since the percentage uncertainty is quite high and there is a significant difference between the calculated value and literature value of lithium. This shows that the experiment had systematic errors which caused this inaccurate value. Do the uncertainties in the apparatus account for this percentage error? No, if we take into account the uncertainty of +/- 0.8, the experimental relative atomic mass value ranges from 7.09 to 8.69. This range does not incorporate the true value of the relative atomic mass of lithium, so we can see that there must be other random or systematic errors in the experiment. Possible sources of error: The reason why the amount of hydrogen collected wasn’t enough (it was expected that the volume of hydrogen would be around 200cm³) was due to the fact that once we added the small piece of lithium in the flask of water, the bung that was meant to cover the flask was not placed as soon as the lithium was added. ...read more.

However, due to time constraints it wasn?t possible for me and my partner to repeat the experiment with relatively the same masses of lithium to get a more precise average for a more reliable result. Human error and parallax error also play a part when acquiring an accurate result. Parallax error occurred when reading of the measuring cylinder to record the start and end volume to find out the volume of hydrogen gas. The clamp stand which was used to hold the measuring cylinder placed in the tub of water was not able to hold the measuring cylinder straight, therefore making it difficult for us to read the value of the volume since the meniscus was tilted. Human errors include the inability to measure the exact amount of lithium for each experiment. The apparatus such as the balance also gave different answers, questioning how dependable our final results are. It was also difficult to fill the measuring cylinder with water to the top so the start volume of water would be different for each experiment, therefore giving imprecise records. ...read more.