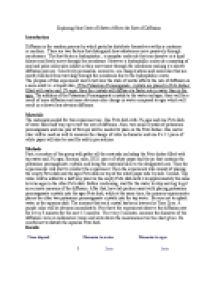 Exploring How State of Matter Affects the Rate of Diffusion

﻿Exploring How State of Matter Affects the Rate of Diffusion Introduction Diffusion is the random process by which particles distribute themselves within a container or medium. There are two factors that distinguish how substances move passively through membranes. The first factor is hydrophobic , a nonpolar molecule that can dissolve in a lipid bilayer and freely move through the membrane. However a hydrophillic molecule consisting of ions and polar molecules inhibit in their movement through the membrane making it a slower diffusion process. Selectively permeable, moreover, are charged atoms and molecules that are mostly blocked from traveling through the membrane due to the hydrophobic center. The purpose of this experiment was to test how the state of matter affects the rate of diffusion in a semi-solid vs. a liquid state. If the Potassium Permanganate crystals are placed in Petri dishes filled with water and 2% agar, then the crystals will diffuse at a faster rate in water than in the agar. ...read more.

Then the experimenter will start to conduct the experiment. Then the experiment will consist of placing the empty Petri dish and the agar Petri dish on top of the white paper side by side. Second, Tap water will be added to a half way point in the empty Petri dish until it is approximately the same level as agar in the other Petri dish. Before continuing, wait for the water to stop moving to get an accurate measure of the diffusion. After that, have lab partner assist with placing potassium permanganate crystals into the agar Petri dish, while at the same time, the primary experimenter places the other two potassium permanganate crystals into the tap water. Be sure not to splash water in the aqueous dish. The moment that each crystal has been lowered is Time Zero. A purple color will be obvious immediately. Next have the experiment observe the diffusion rate for every 3 minutes for the next 15 minutes. ...read more.

Due to passive transport, the movement of molecules from the potassium permanganate have a higher concentration, and are then added to water which diffuses from that high concentration to a lower concentration. This was the expected result. Since water is polar, the crystals can easily diffuse through the gradient. Furthermore, with agar being a nonpolar molecule, it maintained a state of dynamic equilibrium because it diffused slower but was diffused evenly. However since other factors do play a role in the rate of diffusion, maybe temperature could have changed the rate of diffusion for the two Petri dishes. Also had the allotted time been different there may have also been a change in the results. There were no negative results or errors made during this experiment. Based on the results it can be concluded that dropping potassium permanganate crystals into water, diffuses across the gradient faster compared to 2% agar. This does support the initial hypothesis and the predictions were accurate. ...read more.