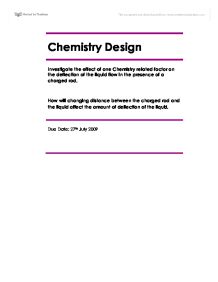 The dependant variables rely on the independent variable of which the experiment needs at least five for a pattern to be identified. The independent variable within the experiment is the distance between the charged rod and the flow of liquid. These distances should range from 1cm to a larger figure. This figure will rely on whether the deflection of liquid can be detected and even though the force can never reach zero due to the equation the force can become undetectable, and any distance larger than this are not useful for the experiment. Changing the distance in equal proportions will help to identify any pattern that occurs. The dependant variable is the amount of angle of deflection of the liquid. The controlled variables will be the rate of flow of the liquid, as if this is different the deflection will change. The rate of flow of the liquid should be small enough so it is not dripping and the deflection is not too large, but not so large that no deflection can be detected for greater distances. ...read more.

the water in which the deflection is still observable, this will then be the maximum point and use the protractor to measure the angle * Once consistent results are found for the maximum point, results should be found between the maximum and minimum points * The rod should be placed in at least three different places to obtain an overall of five or more average deflection data * These results should then be tabulated and graphed to see if there is a relationship between distance and angle of deflection Table 1: Example data table, Data obtained directly from experiment distance changes. Distance from water (cm) Trial 1 Angle(�) Trial 2 Angle (�) Trial 3 Angle (�) Trial 4 Angle (�) Average Angle (�) 1.0 Points in between Points in between Points in between Maximum observable Add uncertainties to table for each specific instrument. Safety Considerations: There are no major safety considerations other then, abiding by standard laboratory rules and ensuring not so much heat is caused when rubbing the rod to charge it, that it causes a burn. ...read more.