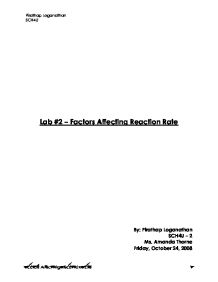 Lab #2 - Factors Affecting Reaction Rate By: Pirathap Loganathan SCH4U - 2 Ms. Amanda Thorne Friday, October 24, 2008 PART A - BACKGROUND INFORMATION Chemical reactions occur at different rates. In this experiment, we considered some of the key factors that affect reaction rate: * particle size * temperature * concentration * catalysts The effect particle size (nature of reactants) has on the rate of a chemical reaction is by how readily bonds are broken and formed, the different phases of the reacting particles and the amount of exposed surface area. The temperature of the system also affects reaction rate. When temperature is increased, particles move faster (more kinetic energy) as there is being more frequent collisions taking pace, and thus an increase in rate. Changes in concentration also plays a role in increasing the rate of a reaction; increased concentration results in more packed particles in the same space, therefore more collisions occur producing a faster reaction rate. Concentration usually increases reaction rate if the reactant are not all in the same phase as well. Lastly, catalysts speed up the rate of a reaction by promoting proper orientation between reacting particles (which will be later discussed along with collision theory) (Helmenstine, 2008). A model used to describe the observed characteristics of reaction rate, the collision theory provides us with a basis to why chemical reactions occur at different rates at a molecular level, and how it alters the speed of a reaction. ...read more.

We obtained samples of both substances, roughly the same mass, and placed them into two separate test tubes on the test tube rack. We then added 5 mL of 1 M HCl to both test tubes. CaCo3 + HCl --> CaCl2 + H2CO3 CaCo3 + HCl --> CaCl2 + H2CO3 We observed that gas evolved at a rapid rate from the test tube containing powdered calcium carbonate and reacted at a slower rate with the test tube containing the solid marble chips (Refer to Table 1.). This phenomena is explained by the collision theory. The effect particle size is directly dependent on the amount of exposed surface area and the state the reacting particles are in. In the test tube containing the powdered calcium carbonate, the rate of the reaction was much more quicker than that of the one with solid marble chips because the size of the particles is much smaller, resulting in a greater surface area for collisions to take place. The more frequent the collisions are, the faster the rate of the reaction is. Also, the reaction rate could have also increased due to the bonds breaking and forming and the nature of the reaction itself (Helmenstine, 2008). In part 2, we determined the effect of temperature had on the rate of a reaction. ...read more.

We first diluted the hydrogen peroxide by adding 10 mL of 3% H2O2 to a 100-mL graduated cylinder and followed by adding 90 mL of distilled water to get 100 mL of dilute (hydrogen peroxide). We then rinsed out our 10-mL graduated cylinder and 7 test tubes with this solution (and poured them away) and then placed 5-mL of the diluted hydrogen peroxide into each of the 7 test tubes. Finally, we added 5 drops of each of the 7 solutions (See Table 4.) to separate test tubes. 2 H2O2 --> 2 H2O + O2 If the addition of the solid form of each chemical increase the rate of the reaction, we answered "Yes" (meaning it was a catalyst) and "No" if it was not a catalyst. According to our findings, three of the substances were possible catalysts. Catalysts speeds up reaction rate by increasing the number of collision sites between the reactants, and promoting proper orientation between reacting particles (reducing intramolecular bonding between reactants). This, in turn, increases the rate of the reaction. It is also important to note that catalysts do not get consumed in the reaction itself. They are especially useless when a particular reaction does not occur fast enough at normal temperatures. Catalysts also lower the activation energy, providing an alternate pathway for more particles to react and for the reaction to occur (i.e. platinum catalyzing the combustion of hydrogen and oxygen at room temperature) (2005). ...read more.