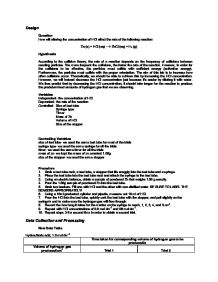 Factors of a reaction lab

Design Question How will altering the concentration of HCl affect the rate of the following reaction: Zn (s) + HCl (aq) ---> ZnCl (aq) + H2 (g) Hypothesis According to the collision theory, the rate of a reaction depends on the frequency of collisions between reacting particles. The more frequent the collisions, the faster the rate of the reaction. However, in order for the collisions to be effective, the particles must collide with sufficient energy (activation energy). Furthermore, the particles must collide with the proper orientation. The aim of this lab is to increase how often collisions occur. Theoretically, we should be able to achieve this by increasing the HCl concentration. However, we will instead decrease the HCl concentration just because it's easier by diluting it with water. We thus predict that by decreasing the HCl concentration, it should take longer for the reaction to produce the predetermined amounts of hydrogen gas that we are observing. Variables Independent- the concentration of HCl Dependent- the rate of the reaction Controlled- Size of test tube Syringe type Timer Mass of Zn Volume of HCl Size of the stopper Controlling ...read more.

Maybe use a straw or something like that to make sure the Zn gets to the bottom of the test tube. And like blow into the straw (softly!) to ensure that none of the Zn gets stuck to the inside of the straw. We didn't use the same syringe for all the trials because we were trying to get all the trials in on the same day. Use the same syringe for all trials. We didn't get all the trials in on the same day. I think it took us three classes. As a result, each day we were working in different room temperatures. Organize ourselves better so that we get all the trials in on the same day. We couldn't dry the test tube correctly. Each time we dried it there was still water at the bottom of the tube. Maybe like attach a paper towel to a stirrer and swap it around inside the test tube to dry it out. Zn is impure. As a result, the HCl acid could be reacting as well with whatever impurities present are thus slowing down the reaction, perhaps. Obtain pure Zn, if possible. ?? ?? ?? ?? ...read more.