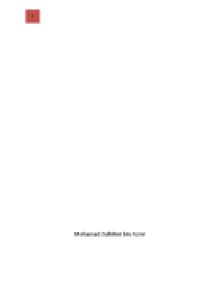 It was then placed under the crucible for strong heating while its lid was lifted occasionally. 8. The magnesium was heated strongly until it turned into gray-white powder. 9. Heating was stopped to allow the crucible, lid and contents to cool. 10. The crucible and its lid, and the end product was weighted 11. Step 1 until 11 was repeated for the second experiment. PRECAUTIONARY MEASURES 1. Goggles need to be wear throughout the experiment. This is because the bright flame produced during reaction is hard to distinguish and emits a harmful intensity of UV light 2. Do not breathe the fumes generated. Inhalation of magnesium oxide fumes can cause metal fume fever TABULATION OF DATA 1. Raw data Mass/g (± 0.01g) Experiment 1 Experiment 2 Magnesium, m1 0.30 0.30 Crucible and lid, m2 22.13 22.13 Crucible and lid + magnesium, m3 22.43 22.45 Crucible and lid + product, m4 22.60 22.62 1. Processed data Aspects Experiment 1 Experiment 2 m1/g (± 0.01g) 0.30 0.30 Number of moles, magnesium /mol = 0.0123 = 0.0123 Mass of oxygen, m5 /g (±0.01g) ...read more.

EVALUATION Overall, the experiment produced a reliable results. However, there are small percentage error on the mass of MgO which indicates that are errors on some aspects of the experiment. Firstly, the time for the opening of the lids was too long. When this happened, some of the MgO escaped to the air and resulted in less mass of the MgO. Secondly, the amount of heat supplied was not even throughout the experiment. This was due to the air movement in the laboratory. The presence of air movement has reduced the amount of heat supplied to magnesium. SUGGESTED IMPROVEMENT Some ways can be implemented to improve the accuracy of the result of the experiment so that it will become closer to the theoretical value. The first thing to consider is reducing the time taken for the opening of the lids. We can avoid the escaping of the MgO to the surrounding by using this method. Next, wind shield must be used during the heating of magnesium. An even heating process can be obtained as we prevent the intervention of air movement which will reduce the amount of heat supplied to the magnesium. ...read more.