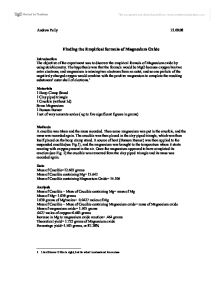 Finding the empirical formula of MgO

Andrew Pelly 21.09.08 Finding the Empirical formula of Magnesium Oxide Introduction The objective of the experiment was to discover the empirical formula of Magnesium oxide by using stoichiometry. The hypothesis was that the formula would be MgO because oxygen has two extra electrons, and magnesium is missing two electrons from an octet, and so one particle of the negatively charged oxygen would combine with the positive magnesium to complete the resulting substances' outer shell of electrons.1 Materials 1 Hoop Clamp Stand 1 Clay piped triangle 1 Crucible (without lid) ...read more.

The crucible was then placed in the clay piped triangle, which was then itself placed on the hoop clamp stand. A source of heat (Bunsen Burner) was then applied to the suspended crucible(see Fig.1), and the magnesium was brought to the temperature where it starts reacting with oxygen present in the air. Once the magnesium appeared to have completed its reaction (see Fig. 2) the crucible was removed from the clay piped triangle and its mass was recorded again. ...read more.

yield= 1.722 grams of Magnesium oxide Percentage yield=1.503 grams, or 87.28% Conclusions The Magnesium almost certainly reacted to form the compound MgO. The yield was 87.28% of the theoretical yield for MgO, so it is very unlikely that any MgO2 was formed or the yield(in grams) would have been higher. This accepted the classes' hypothesis that Magnesium and oxygen would react in this way due to their electron shell configuration. 1 I don't know if this is right, but its what I understood from class ?? ?? ?? ?? ...read more.