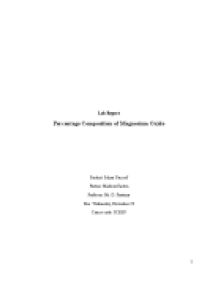 Observations Mass of crucible and lid Mass of crucible, lid and Mg After heating (first time) After adding H2O After heating (final time) 32.13g 32.34g 32.47g 32.47g 32.47g Analysis This lab was conducted in order to confirm the chemical formula of magnesium oxide. In this investigation, one strip of magnesium was coiled and put into a ceramic crucible and cooked over a Bunsen burner with an intense flame. The magnesium nitride that may have formed was chemically converted to magnesium oxide and the mass and percentage composition of the product was determined. Source(s) of Error This investigation required extreme caution as there were many possibilities for error. In order to prevent magnesium oxide escaping from the crucible during heating, the lid was left slightly ajar. The size of the slot (too large) could have greatly altered the final mass of the product. Magnesium may not have reacted completely with oxygen. The water may not have evaporated completely. Any leftover compounds in the crucible from previous experiments may have varied or contaminated the reaction. Leftover compounds could also have added extra mass to the total mass. The water could have been contaminated. ...read more.