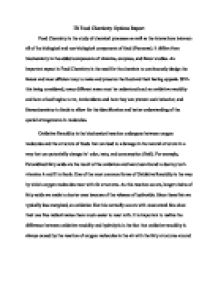 Food Chemistry Options Report - many different areas must be understood such as oxidative rancidity and how a food begins to rot, Antioxidants and how they can prevent such behavior, and Stereochemistry in foods to allow for the identification and better

IB Food Chemistry Options Report Food Chemistry is the study of chemical processes as well as the interactions between all of the biological and non-biological components of food (Fennema). It differs from biochemistry in the added components of vitamins, enzymes, and flavor studies. An important aspect in Food Chemistry is the need for the chemists to continuously design the fastest and most efficient way to make and preserve the food and their lasting appeals. With this being considered, many different areas must be understood such as oxidative rancidity and how a food begins to rot, Antioxidants and how they can prevent such behavior, and Stereochemistry in foods to allow for the identification and better understanding of the spatial arrangements in molecules. Oxidative Rancidity is the biochemical reaction undergone between oxygen molecules and the structure of foods that can lead to a damage in the natural structure in a way that can potentially change its' odor, taste, and consumption (Neil). For example, Peroxidized fatty acids are the result of the oxidation and have been found to destroy both vitamins A and E in foods. ...read more.

Instead of antioxidants, manufactures often use packaging as a way to fight subsidize the effects of the antioxidants since they block out any light as well as isolate the food from the presence of any reactive oxygen molecules in the air. The way by which these antioxidants are actually used to prevent oxidative rancidity is by controlling the free radicals of food so that these foods end up being much less reactive with the oxygen in the air. It is also very important for manufacturers to keep the levels of water-soluble and fat-soluble near the same so that a balance is maintained throughout the food that is trying to be protected. Along with the use of Antioxidants, prevention of oxidative rancidity can also be improved by the location with which the food is stored. Since heat and light have shown to have a profound effect on the speed of the reactions, the best location is one that is temperature controlled as well as typically dark so that there are no potential catalysts for the oxidation. Another less well known aspect of Antioxidants is their profound effect as a nutritional value in the body. ...read more.

Chiral carbons are those that have four different substances attached to each area of electron density. These are unique because they allow for a virtual "mirror image" that can have completely different traits from a physically very similar molecule. These carbons are huge in the field of sugars as they are used to identify and then produce the most addictive combination. They can also be used very similar in the production of amino acids by allowing for a more effective production. When looking back on the other food options report it can be seen that this one focused much more on the reactions that foods can and do undergo whereas the last report focused much more on the actual chemical compositions of food. Oxidative rancidity plays a huge role in the preservation of food and how quickly it can go bad. Fortunately, Antioxidants have become so prominent in the field of food chemistry today that they do a very good job of keeping up with the oxidation. With stereochemistry, it is huge to realize how much thought must go into the analyzing of a chemical structure. It is really interesting to see how prominent something like chiral carbons have become in the production of foods in general. ?? ?? ?? ?? ...read more.