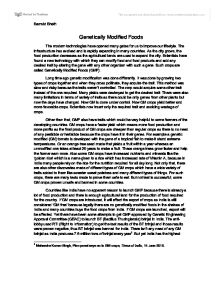 Genetically Modified Foods The modern technologies have opened many gates for us to improve our lifestyle. The infrastructure has evolved and is rapidly expanding in many countries. As the city grows, the food production decreases as the agricultural lands are used to expand the city. Scientists have found a new technology with which they can modify food and food products and add any desired trait by altering the gene with any other organism with such a gene. Such crops are called Genetically Modified Foods (GMF). Long time ago genetic modification was done differently. It was done by growing two types of crops together and when they cross pollinate, they acquire the trait. This method was slow and risky because the traits weren't controlled. The crop would acquire some other trait instead of the one required. Many yields were destroyed to get the desired trait. There were also many limitations in terms of variety of traits as there could be only genes from other plants but now the days have changed. ...read more.

Countries like India have no apparent reason to launch GMF because there is already a lot of food production and there is enough agricultural land for the production of food required for the country. If GM crops are introduced, it will affect the export of crops as India is still considered 'GM free' because legally there are no genetically modified foods in the shelves of India and many countries buys the food crops from India. If GM crops are launched, export will be affected. Yet there have been some attempts to get GMF approved by Genetic Engineering Approval Committee (GEAC) to launch BT (Bacillus Thuringiensis) brinjal in India. The anti-lobby used RTI (Right to Information) to get the test results of the BT brinjal and those results were proven negative, thus BT brinjal was banned for India. There isn't any need of any GM brinjal as India produces 7.6 million tons of brinjal every year1. But yet India has the highest number of field tests done for GM crops. ...read more.

If a tomato dish is served to a vegetarian and told that the tomato has fish DNA inside it, the person wouldn't eat it and this is why GM foods is a very controversial topic. The acceptance of GM crops will vary from country to country and region to region because each country and region has its own morals and ethics which might or might not allow them to have un-naturally grown foods. GM crops have genes from other organisms and eating the other animals is not accepted in some people's morals. They might not want to eat any other organism's genes either. Other than that not all countries will label the GM crops because it might be profitable or not to the country as the mentality varies in every region and so does the perception of the people. Some people might take it as lightly as a gene and some would take it as a big issue and insult to the religion. The GM foods shouldn't be used as they have a risk on many environmental, social and economic aspects as well as human health. ...read more.