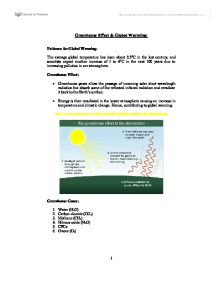 Greenhouse Effect & Global Warming: Evidence for Global Warming: The average global temperature has risen about 0.50C in the last century, and scientists expect another increase of 1 to 40C in the next 100 years due to increasing pollution in our atmosphere. Greenhouse Effect: * Greenhouse gases allow the passage of incoming solar short-wavelength radiation but absorb some of the reflected infrared radiation and reradiate it back to the Earth's surface. * Energy is then reradiated in the lower atmosphere causing an increase in temperature and climatic change. Hence, contributing to global warming. http://www.wwnorton.com/college/chemistry/gilbert2/contents/ch09/studyplan.asp Greenhouse Gases: 1. Water (H2O) 2. Carbon dioxide (CO2) 3. Methane (CH4) 4. Nitrous oxide (N2O) ...read more.

in the atmosphere and on their ability to absorb heat radiation. However, each molecule has its own type of bond, they each absorb at slightly different frequencies and wavelengths. Gas Heat trapping effectiveness compared with CO2 Overall contribution to increased global warming. Water 0.1 >1% Carbon dioxide 1 50% Methane 30 18% Nitrous oxide 150 6% CFCs 2000 12% Ozone 10,000 - 25,000 14% 1. Water= has the most over all contribution to global warming as it has a high concentration. 2. Carbon dioxide= is the most important green house gas as contributes 50% to global warming and has second largest concentration. 3. CFCs= are thousands of times better at absorbing heat/ infrared radiation than CO2 - BUT they have a lower concentration; hence, their effect is limited to 14%. ...read more.

CFC fills this window. Methane is 30x more effective in its green house effect as it has 4 C-H bonds, which means it can absorb more at a certain frequency. Influence of Gases on Global Warming: 1. Increase in temperature by about 0.5 degree. 2. Increase in precipitation 3. Rise in sea levels- melting of glaciers/ ice caps/ thermal expansion of water 4. Changes in crop yields 5. More severe droughts 6. More floods and storms 7. Changes in distribution of pathogens and insects (e.g. malaria). Influence of Particulates on Temperature: 1. Particulates= volcanic dust. 2. It scatters and reflects incoming sunlight (UV and visible) so less solar radiation can enter the atmosphere. 3. It lowers atmospheric temperature as provides condensation nuclei around which water particles condense to form clouds reducing solar heating. 4. Volcanic eruptions & forest fires- increases number of particulates. ?? ?? ?? ?? 1 ...read more.