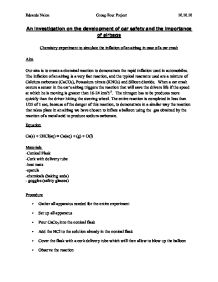 An investigation on the development of car safety and the importance of airbags Chemistry experiment to simulate the inflation of an airbag in case of a car crash Aim Our aim is to create a chemical reaction to demonstrate the rapid inflation used in automobiles. The inflation of an airbag is a very fast reaction, and the typical reactants used are a mixture of Calcium carbonate (CaCO3), Potassium nitrate (KNO3) and Silicon dioxide. When a car crash occurs a sensor in the car's airbag triggers the reaction that will save the drivers life if the speed at which he is moving is greater than 16-24 km/h-1. The nitrogen has to be produces more quickly than the driver hitting the steering wheel. The entire reaction is completed in less than 1/25 of 1 sec, because of the danger of this reaction, to demonstrate in a similar way the reaction that takes place in an airbag we have chosen to inflate a balloon using the gas obtained by the reaction of a metal acid to produce sodium carbonate. Equation Ca(s) + 2HCl(aq) = Ca(aq) + (g) + O(l) Materials -Conical Flask -Cork with delivery tube -heat mats -spatula -chemicals (baking soda) - goggles (safety glasses) Procedure � Gather all apparatus needed for the entire experiment � Set up all apparatus � Pour CaCo3 into the conical flask � Add the HCl to the solution already in the conical flask � Cover the flask with a cork delivery tube which will then allow to blow up the balloon � Observe the reaction Conclusion Our experiment was successful in proving the function of an airbag of a car. Our experiment aimed to demonstrate the safety of the passengers of an automobile, through the use of an airbag. For our chemistry experiment we chose to adapt the airbag inflation to our IB program syllabus, hence by doing an experiment similar to the one we had already successfully completed during the school year. ...read more.

Nowadays car featuring crumple zones and rigid cabs are standard safety requirements in almost every car made throughout the world. The fact that a car that crushes more easily protects its passengers more than a car that does not crush at all, may seem strange, but, in fact, the reason for this seem obvious when considering the physics behind it. Newton's first law states that a body will remain at rest or continue travelling at uniform motion (constant velocity) unless a force is acted on it. Therefore, in a situation in which a car is impacting with a wall, if a vehicle is travelling at 70 km/h, the passengers inside are doing the same, and when the vehicle collides with the wall and comes to a sudden stop, the passengers' bodies will continue going in the same direction at the same speed, 70 km/h. As stated in the law, these bodies will keep on moving forward until they themselves collide with a part of the car or with another passenger. Even when the human body comes to rest in this kind of incident, its internal organs slam against each other and against bones. This will, of course cause, injuries to the passengers and sometimes even death. Newton's second law of motion states that: The law conveys that as the time taken by the car to arrive to complete rest increases, the force transferred to the car and, therefore its passengers, will be decreased. On the other hand, if the amount of time to reach complete halt is decreased, the force experienced will be greater. Crumple zones are specifically designed in order to crush, absorbing part of the force of the collision. The force of the collision is given out during the impact in the form of heat, sound and in from of mechanical work done on the crumple zone. The front (and rear) part of the car acts as a cushion and it is able to increase the time taken to reach complete halt and, hopefully, save the passengers' lives. ...read more.

The project could have been done in a more efficient way; we lost a lot of time to actually start with various ideas, set the experiments, and start working as a group, although it is possible to recognize the fact that our problems in getting organized were also due the fact that the members of the group never had study periods at the same time. Probably, something that could have really helped our report was to have a "leader" perhaps not the smartest, but the one who could have made sure that everyone who was actually proceeding with their tasks, and not wait for the last minute to do so. Perhaps he/she could have given the others some deadlines, and set up meetings to see how everyone was doing. Another thing that we could have improved in our Group 4 Project was that we didn't have many meetings, we had also the summer to work on it, and we didn't really do much, so we waited for September when we came back from vacations to start again to worry about finishing the project. Moreover, every member of the group was at a different level in chemistry and math, for example: Jacopo and Daniel are very good at chemistry and physics, in fact they chose the scientific course, while Laure, Edoardo, Maria and I don't even take physics and aren't objectively very good in chemistry. However, what emerged from our difficulties was a complex and elaborated project, a research on an important thematic such as safety in the streets, focusing on car accidents. Our project could be expanded on an international scale by suggesting other schools to perform the same research as we did, hence rising internationally the awareness in students on how chemistry and physics are important on a daily basis, how these subjects are at the base of our most important healthy issues. Edoardo Nalon Group Four Project 10.10.10 Edoardo Nalon Group Four Project 10.10.10 ...read more.