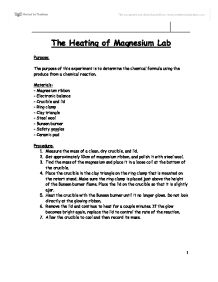 The Heating of Magnesium Lab Purpose: The purpose of this experiment is to determine the chemical formula using the produce from a chemical reaction. Materials: - Magnesium ribbon - Electronic balance - Crucible and lid - Ring clamp - Clay triangle - Steel wool - Bunsen burner - Safety goggles - Ceramic pad Procedure: 1. Measure the mass of a clean, dry crucible, and lid. 2. Get approximately 10cm of magnesium ribbon, and polish it with steel wool. 3. Find the mass of the magnesium and place it in a loose coil at the bottom of the crucible. 4. Place the crucible in the clay triangle on the ring clamp that is mounted on the retort stand. Make sure the ring clamp is placed just above the height of the Bunsen burner flame. Place the lid on the crucible so that it is slightly ajar. 5. Heat the crucible with the Bunsen burner until it no longer glows. Do not look directly at the glowing ribbon. ...read more.

= 0.221g - 0.22g x 100 0.22g = 0.45% error 6)Percent Yield Yield= Experimental yield x 100 Theoretical yield Experimental yield-->Mass of MgO= 0.221g Theoretical yield--->Mass of MgO= 0.22g = (0.221g/0.22g) * 100 = 100.5% yield In conclusion the empirical formula for MgO proves that the lowest ratios of the atoms of oxygen and magnesium have close to the same ratio. Any discrepancies were possibly a result of an error in some of the equipment that was used to weigh the magnesium and oxygen. This could explain why the empirical formula was 1:1.04 as there is a chance that the preciseness of the scale might have been incorrect, also next time the lab is done, the mass of the lid after the experiment should be taken into account as the magnesium oxide might have been evident upon it as well as there were grey streaks after the experiment on the lid. Furthermore, if we did the experiment more times (held more trials) we could've got an average or at least made sure the behavior we noticed stayed consistent. ?? ?? ?? ?? 1 ...read more.