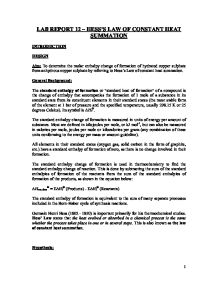 5 H2O = 249.5 g No. of moles of CuSO4 = [Given mass of CuSO4] � [Molar mass of CuSO4] = [3.19 g] � [159.5 g] = 0.02 mole No. of moles of CuSO4 . 5 H2O = [Given mass of CuSO4 . 5 H2O] � [Molar mass of CuSO4 . 5 H2O] = [4.99 g] � [249.5 g] = 0.02 mole Enthalpy Cycle for the Reaction: From the enthalpy cycle included in the previous page, the enthalpy change that we are going to determine is ?H. From the knowledge of Hess's Law of constant heat summation, we can say: ?H + ?Hp = ?Ha Rearranging the above expression, we can get: ?H = ?Ha - ?Hp Therefore, in order to obtain ?H, we will have to calculate the difference between ?Ha and ?Hp. Calculating Change in Temperatures: Change in Temperature = Highest Temperature - Lowest Temperature From the data collected while conducting the experiment, the lowest temperature reached = 27 �C. However the estimated lowest temperature obtained from graph 1 attached earlier = 25 �C. Therefore this estimated temperature from the graph compensates for the amount of heat energy gained from the surroundings while conducting the experiment and hence, the lowest temperature reached is 25 �C and this value will be used hereafter in order to carry out the necessary and appropriate calculations. Change in Temperature for Hydrated Copper (II) Sulphate = (29 � 0.5) - (25 � 0.5) ...read more.

Evaluation: The method and materials used for this experiment was pretty good, but because an error has been experienced, some improvements could be made for a more accurate and correct result. The errors and improvements linked to this experiment include the following: > Using the electronic balance to measure the mass of the hydrated and anhydrous copper (II) sulphate used was a good idea as it has no uncertainties or errors linked to it. Also, making sure that the volume readings were noted by reading the lower meniscus was a good practice, eliminating human errors and leading to more accurate and reliable readings and results. > Replacing the analogue thermometer used in this experiment with a digital thermometer can help to reduce the relatively high uncertainty linked to the use of the analogue thermometer. Basically, it was this limitation i.e. use of the analogue thermometer which involved an error of 20% in the calculations carried out earlier. Hence, using a digital thermometer would avoid such errors and enable us to obtain more accurate and reliable reading and results. > There could have been significant heat losses to the surroundings during the duration of this experiment. Hence, using a well covered and insulated calorimeter instead of an open beaker could avoid such heat losses to the surroundings and therefore not hindering with the readings and results obtained. > If the calculations carried out and the results obtained are expressed in more significant figures it can lead to more accurate outcomes and results. ...read more.