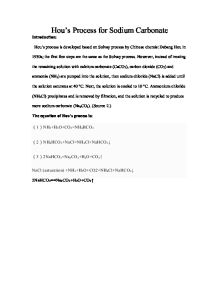 Hou's Process for Sodium Carbonate Introduction: Hou's process is developed based on Solvay process by Chinese chemist Debang Hou in 1930s; the first few steps are the same as the Solvay process. However, instead of treating the remaining solution with calcium carbonate (CaCO3), carbon dioxide (CO2) and ammonia (NH3) are pumped into the solution, then sodium chloride (NaCl) is added until the solution saturates at 40 �C. Next, the solution is cooled to 10 �C. Ammonium chloride (NH4Cl) precipitates and is removed by filtration, and the solution is recycled to produce more sodium carbonate (Na2CO3). ...read more.

can be used as fertilizer, and can also be united with the production of ammonium. Hou's process uses carbon monoxide (CO) to produce the required carbon dioxide (CO2) instead of using calcium carbonate (CaCO3). This eliminates the by-product calcium chloride (CaCl2) which is produced from the calcium carbonate (CaCO3) in the Solvay process. (Source 3.) How does the Hou's process help society? In 1930s, the Chinese were not able to produce Sodium Carbonate (Na2CO3) by themselves. The Chinese government had to import Sodium Carbonate (Na2CO3) ...read more.