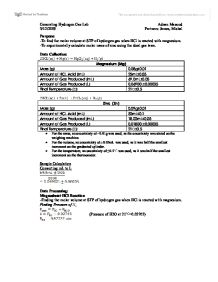 For the second part of the experiment it was experimentally found using the ideal gas laws that the molar mass of zinc is 124 g/mol. When compared with the actual value of 65g/mol, there is a percent difference of 90%. And even if uncertainties are considered, the percent difference is only reduced to 64%. This is too big; therefore the data is rendered unreliable. There were quite a few weaknesses and limitations in this lab. First of all the volume of H2O mixed in with the H2 gas was not considered. Had it been considered, then the volume found at STP would have been lower, and it would give a more accurate measurement to what the experimental value is. Another weakness in this lab was the fact that the molar mass of zinc was twice as big as its accepted value. The most likely reason for this is that when the zinc reacted, it is likely that some of the hydrogen gas was not in the beaker, but the hydrogen gas escaped into the air. ...read more.

There are a number of ways that this lab could be improved. First of all, a new graduated cylinder should be used to ensure that there are no cracks or holes through which the hydrogen gas can escape. Along with that the apparatus should not be left out overnight, but instead the reaction should be speeded up by heating up the apparatus, and then taking the measurements of the volume of gas every 1 minute. This in turn would decrease the amount of energy lost to the environment, and it would end up giving more accurate results. Next time, the volume of should also be considered. A percentage value can be used, since we know the pressure that gives, that pressure can be converted into a percent, and multiplies by the total volume, and then inversed. This in turn will in turn give the volume of .This will hold true because V=nRT/P, so pressure and volume are inversely proportional, and since nRT is a constant V and P have to change accordingly. ?? ?? ?? ?? Generating Hydrogen Gas Lab Adnan Masood 3/12/2009 Partners: James, Mishal ...read more.