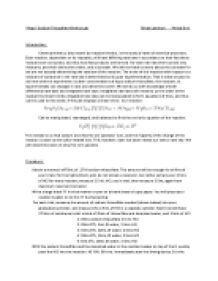 ﻿?Hypo? Sodium Thiosulfate Kinetics Lab Ethan Landrum Period One Introduction: Chemical kinetics, also known as reaction kinetics, is the study of rates of chemical processes. Each reaction, dependent on its reactants, will have differing rate laws in accordance to how fast these reactants are consumed, and thus how fast products are formed. For each rate law there consist only reactants, and their distinctive orders, and a constant. We will not have to worry about the constant for we are not actually determining the rate law of the reaction. The order of the reaction with respect to a reactant of substance in the rate law is determined only upon experimentation. That is what we plan to do here with this experiment: to alter concentrations of hypo sodium thiosulfate, the reactant, to experimentally see changes in rate and determine order. We will do so with knowledge of both differential rate laws and integrated rate laws. Integrated rate laws will reveal to us the order of the reactant by linear trends; integrated rate laws can be manipulated to form equations of lines, and thus can be used to find order, if the plot displays a linear trend. ...read more.

And then, by noticing patterns in its concentration over time, we can determine its order, and then go on to find the rate law. The rate law in general consists of: Where A and B are both reactants and each have a certain order, n and m. In this case we only know one of the reactants, A, and its order, n (hypo sodium thiosulfate with order of 2). We would have to find the order of HCl in order to progress in finding the rate law. Error in this lab could have arisen as systematic error in measurements, such as measuring out correct volumes of reactants and deionized water. Even then systematic error can be added for the meniscus phenomenon. Error also could have risen from systematic incorrect recordings of time. The concentration graphs were dependent on time and could have been wrong because of it. Also a definite user error could erupt from one?s determination/definition of opacity; when the ?X? may have not been visible to some, others may have been still been able to see it as the reaction continued, and this could have largely affected time measurements. And, as always, random could have occurred in the instance of unwanted substances such as dust and excess water, which may have (but not likely) affected either the reaction or the concentrations or both. ...read more.