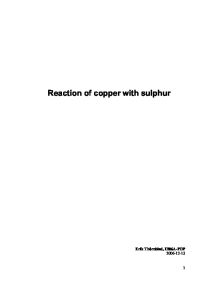 Reaction of copper with sulphur Erik Th�rnblad, IB06A-PDP 2006-12-13 Introduction Our assignment was to determine the formula of copper sulphide. As copper atoms ionize, they form either or Sulphur atoms, when ionized, always form. As copper has two variants of ions, two solutions were possible, videlicetand Material Materials available and used were: tripod, triangle, crucible with lid, Bunsen burner and a scale which had an uncertainty of Variables The beforehand known variables were the molar mass of respective element. The variables we had to find to reach our conclusion was the mass of respective element, how many atoms of which element, and in which ratio they occurred. ...read more.

The reason why to have lid on was to prevent that oxygen would have reacted with the sulphur. After the five minutes of burning, the lid was taken off. The excessive sulphur now reacted with oxygen and sulphur dioxide was produced, which is a gas, and therefore it did not stay in the crucible. After the procedure of burning, the mass of the crucible with content was measured. Data The molar mass was easily found by looking at the periodic table. was as previously mentioned measured by putting the six copper tacks on a scale. ...read more.