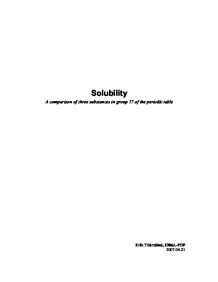 Solubility A comparison of three substances in group 17 of the periodic table Erik Th�rnblad, IB06A-PDP 2007-04-21 Aim The aim for this lab was to investigate how the altering of anions does affect the solubility of three different substances. Variables The independent variables were the salts, which were altered throughout the experiment. The solubility was the dependent variable, and the controlled variables were the temperature and the volume o the water. Equipment * 6.41 g Potassium Chloride, * 6.41 g Potassium Bromide, * 6.41 g Potassium Iodide, * 5 g water, (for each experiment) Magnetic stirrer, magnet, funnel, filter (0.87 g), two beakers (20 ml 17.27 g), spoon, scale with an uncertainty of � 0.005 g and a graduated cylinder with an uncertainty of � 0.05 ml Method At first, 5 ml (5 g) water was filled up with the graduated cylinder, and then moved to the beaker. The beaker was then filled with an excess of Potassium Chloride. The beaker was put on a magnetic stirrer, and with a magnet we stirred the solution for two minutes. The solution was then filtrated with the funnel and the filter, and thus we got the excess salt, that had not dissolved in the water, alone in the filter. As the filter became wet, drying was required to evaporate the water. ...read more.

Evaluation One test per salt is far too little. It is not at all certain that the result is reliable. There might have been some kind of error, a human mistake, or just pure chance, which affected the result. It is possible that the results are supposed to be the other way around, with KI as the salt dissolving the least, instead of KCL. It is not certain whether the test was completely saturated or not. That excess salt actually appeared indicates that the samples were saturated, but still the results are far from plausible. The explanation to this most likely is that a considerable amount of salt stayed in the beaker when the solution was poured into the funnel. Instead of drying the beaker (some water remained) and weighing that salt as well, that salt was simply ignored, despite its importance for the experiment. Ignoring the salt greatly diminishes the trust in this experiment's results. Instead of using the graduated cylinder when measuring up the water, the scale should have been used for this as well. The graduated cylinder was only correct to � 0.05 ml, or to � 0.05 g (1 ml water = 1 g), whilst the scale had an uncertainty of � 0.005 g. A more precise result would have been guaranteed using the scale for this as well. ?? ?? ?? ?? 5 ...read more.