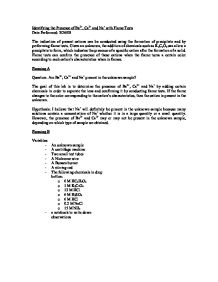 Identifying the Presence of Ba2+, Ca2+ and Na+ with Flame Tests Date Performed: 3/26/08 The indication of present cations can be conducted using the formation of precipitate and by performing flame tests. Given an unknown, the addition of chemicals such as K2C2O4 can allow a precipitate to form, which indicates the presence of a specific cation after the formation of a solid. Flame tests can confirm the presence of these cations when the flame turns a certain color according to each cation's characteristics when in flames. Planning A Question: Are Ba2+, Ca2+ and Na+ present in the unknown sample? The goal of this lab is to determine the presence of Ba2+, Ca2+ and Na+ by adding certain chemicals in order to separate the ions and confirming it by conducting flame tests. ...read more.

write down observations Procedure: In order to test for the presence of Ba1+, Ca1+ and Na1+ take a few grams of the unknown and place it into a test tube, placing eight drops of 6 M acetic acid and a drop of 1 M K2CrO4 so that the anions can be separated to identify if there is any concentration of barium. Stir well with a stirring rod and if any yellow precipitate forms, then barium is present. However, if barium is not present, centrifuge the solution and save the decantate into a separate test tube. Using 15 M NH3, bring the decantate into blue litmus, using litmus paper. If precipitate forms, centrifuge the solution, decant and pour enough 6 M HCl so that the precipitate is dissolved. ...read more.

There was no formation of yellow precipitate; a green color flame did not appear during the flame test. no Ca1+ flame test A little flash of orange appeared. yes Na+ flame test For the unknown solution, there was a yellow color flame during the flame test. yes, but only a trace Conclusion and Evaluation My hypothesis was partially correct in the fact that there was sodium present in the unknown sample. Sodium is found in usually almost every solution whether they are in large quantities or small quantities. After conducting the experiment and obtaining the data, barium is not present in the unknown, but calcium was. The written molecular equations of each the three cations also indicated whether or not precipitate was going to form. The flame tests were an even better confirmation for the presence of these cations since some cations have the characteristics dependent on color when in flames. ?? ?? ?? ?? ...read more.