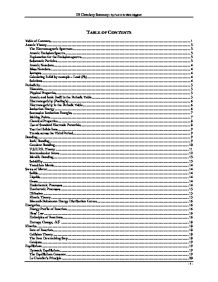 Water, Ammonia. * Boiling Points * Melting Points NH3 BiH3 AsH3 PH3 SbH3 Low Propane V.d.W's Ethanal Dipole-dipole High Ethanol Hydrogen All have similar Masses Metallic Bonding * The bonding is the attraction between cation and delocalised electrons. * Down Groups I and II (Alkali and Alkali Earth Metals) o The boiling points decrease as the metallic bond becomes weaker. o Each element donates electrons to form the sea of delocalised electrons. However, as the number of shells increases, the distance between the nucleus and the electron sea increases. Thus, the attractive force decreases and less energy is required to break the bonds. * Across Na-->Mg-->Al o The m.p.t increases as there are more valence electrons. This gives a greater difference in charge between the cations and the sea of electrons. o Also, the ionic radii decreases, reducing the distance between the cations and the sea of electrons. * Properties of Metals o Good conductors of electricity --> delocalised electrons. o Good conductors of heat-->electrons jumping through cations and moving energy from to . o Shiny --> light absorbed by electrons and re-emitted at different Energy levels. o Malleable --> pushing layers. o Ductile --> moving the layers. o Grey coloured --> release all ; white light intensity is low making the metal look grey. Solubility * Alcohols Size of the hydrocarbon chain increase Solubility in water decreases as more of molecule interacts by Van der Waal's than by H-bonding with water. Solubility in benzene increase as more of molecule interacts by Van der Waal's than by H-Bonding. * In water: o We need covalent molecules which can interact with the water molecules easily. o Need to be the same types of intermolecular forces. E.g. hydrogen bonding or, to a lesser extent, dipole-dipole attraction. * In organic solvents: o E.g. Benzene o Are generally non-polar, therefore are used to dissolve non-polar molecules that have Van der Waal's. ...read more.

* E.g. Cyclohexane and Hexene --> o Isomers have equal numbers of electrons and therefore would be expected to have the same Van der Waal and b.p.t. However, they are more spherical in shape and this reduces surface area, therefore lowering both Van der Waal's forces and b.p.t. Stability of Carbon Chains vs Silicon Chains * Si will also form chains with itself but they are not stable in an oxidising atmosphere. * Stability comes from two places: o C-C and C-H are similar in energy with C-O. So there is little to be gained in energy in oxidising a hydrocarbon. This is not true for Si. o Si-Si and Si-H are much weaker than C-C and C-H. So the activation energy for combustion of silicon hydride organic analogues is so low that it happens at S.T.P. Naming Convention (IUPAC) 1. Find the longest carbon chain (you can count around corners) 2. This will be named according to the sequence meth, eth, prop, but, etc. 3. Chose the principal functional group to get the ending, e.g. Alkanes end in -ane, alkenes in -ene, alcohols in -ol, etc. 4. Branching of the carbon chain: * Decide on the length of the branch --> 1C is methyl, 2Cs is ethyl, etc. * Decide on the location of the branch: * 2nd C atom on branch --> 2-methyl. * 3rd C atom on branch --> 3-methyl. Make this number as small as possible. 5. Other substituents on the C chain in addition to branches: * -Cl --> chloro- * -Br --> bromo- * -I --> iodo- * -OH --> hydroxyl- (except in alcohols) * =O --> carbonyl- (except in acids, aldehides and ketones) Reactions with Hydrocarbons * Additions: o Hydrogenation o Ethanol o Bromoethanol o Polyethene * Alcohols Ethanol (alcohol) Ethanal Ethanoic acid (carboxylic acid) * Esters Ethyl ethanoate o Structural Formulae Pattern o R --> Any alkyl group R'--> Another alkyl group o Forms Alkyl alkanoates IB Chemistry Summary- By Paul Li & Silvia Riggioni IB Chemistry Summary- By Paul Li & Silvia Riggioni - 26 - - 1 - ...read more.