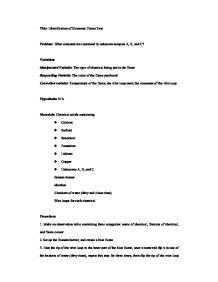 Title: Identification of Elements: Flame Test Problem: What elements are contained in unknown samples A, B, and C? Variables: Manipulated Variable: The type of chemical being put in the flame Responding Variable: The color of the flame produced Controlled variable: Temperature of the flame, the wire loop used, the cleanness of the wire loop Hypothesis: N/A Materials: Chemical solids containing: * Calcium * Sodium * Strontium * Potassium * Lithium * Copper * Unknowns A, B, and C Bunsen burner Matches 2 beakers of water (dirty and clean rinse) Wire loops for each chemical Procedure: 1. Make an observation table containing three categories: name of chemical, formula of chemical, and flame colour 2. Set up the Bunsen burner, and create a blue flame 3. Heat the tip of the wire loop in the inner part of the blue flame, once it turns red dip it in one of the beakers of water (dirty rinse), repeat this step for three times, then dip the tip of the wire loop into the other beaker of water (clean rinse) ...read more.

One of them is the color of the flame produced when the chemical is heated. Different chemicals react differently when being heated, and the color of flame produced by each element will be different as well. By comparing the color(s) of the flame produced by each unknown chemical with that of the other chemicals, the content of the unknown chemical will be determined. Also the shape and transparency of the crystals of each chemical may be slightly different from that of the others, so this characteristic will also help to determine what the unknown chemicals are; although the use of this is limited due to the fact that the structures and colours of most of these chemical powders were very similar. Conclusion: Unknown A could very well be containing calcium, since the colour of its flame is orange, and the flame colours of calcium nitrate and calcium chloride are both orange. ...read more.

The flame of unknown C was also very similar to that of strontium nitrate. However, the powders of Unknown C were not as fine as that of strontium nitrate, so the chances of unknown C being strontium nitrate is slim. What is almost for certain is that unknown C contains strontium. An error that could have been made in the experiment is that the tip of the wire loop may not be cleaned thoroughly before being dipped into the next chemical. This could affect the observation of the flame color observed for the next chemical. Post Lab Discussion Question: The flame test could be used to test unknown ionic compound powders that are hard to be determined with the human eye since some ionic compound powders are very similar in structure, transparency, and color. Plus most ionic compounds tend to form crystals, which makes it even more difficult to tell some of them apart. By using the flame test, scientists or factory workers are able to determine which chemical is which by comparing the colours of the flame produced. ...read more.