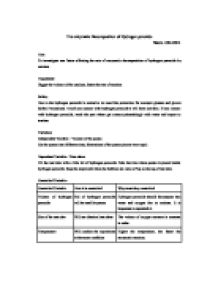 Investigate one factor affecting the rate of enzymatic decomposition of hydrogen peroxide by catalase.

I recorded the time taken with the stopwatch to two decimal places. I measured 5ml of hydrogen peroxide with 10ml measuring cylinder as soon as possible because they might react with something in the air and change. Also all the controlled variables were controlled. No anomalous results are shown in my graph and table. There are several stuffs that I can improve next time. One is, to increase the reliability of results, I could have put thermometer to measure the room temperature. This must be controlled to make it a fair experiment because reaction will easily get changes by dim temperature difference. Evaluation of results: The results of my experiment were precise. As the graph shows, no anomalous results were found. This indicates that the experiment was enough fair and went successful. Due to the topic of this experiment is biology the experiment, 'The Enzymatic Decomposition of Hydrogen Peroxide' falls on Health and Social Education in AOI. ...read more.