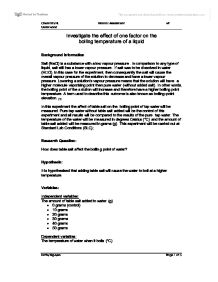 Investigate the effect of one factor on the boiling temperature of a liquid Background Information Salt (NaCl) is a substance with a low vapour pressure. In comparison to any type of liquid, salt still has a lower vapour pressure. If salt was to be dissolved in water (H2O), in this case for the experiment, then consequently the salt will cause the overall vapour pressure of the solution to decrease and have a lower vapour pressure. Lowering a solution's vapour pressure means that the solution will have a higher molecule vaporising point then pure water (without added salt). In other words, the boiling point of the solution will increase and therefore have a higher boiling point temperature. A term used to describe this outcome is also known as boiling-point elevation. [1] In this experiment the affect of table salt on the boiling point of tap water will be measured. Pure tap water without table salt added will be the control of this experiment and all results will be compared to the results of the pure tap water. ...read more.

undisturbed on blue flame to reach its optimum temperature When the Bunsen burner safe flame is changed to blue flame, the Bunsen burner will be left on the bench undisturbed for 2 minutes The repetition and speed of stirring the solution When the beaker is placed onto the tripod with the blue flame on, immediately 5 slow circle rotations of the stirring rod will be performed to dissolve the salt into the water The amount of water used for this experiment For this experiment, 500 millimetres of water will be measured in the beakers. When measuring the water level, the observer must get down to eye level to avoid parallax error and misreading of the water level Avoiding contaminations to the equipment used in this experiment Before using equipments, distilled water will be used to thoroughly clean all equipments to avoid contamination and residues The brand and type of table salt used for this experiment Woolworths Iodated Table Salt will be used for this experiment The accuracy of measuring small amount of salt The sampler spoon will be filled with salt right to the top, (touching the edges but not overflowing) ...read more.

The Bunsen burner was set up and the safe flame was left on. The tripod was placed directly above the flame 7. When the Bunsen burner was changed to the blue flame, the stopwatch was used to record 2 minutes of the flame left undisturbed 8. The beaker that read Control was immediately placed onto the tripod after two minutes was up 9. The stirring rod was instantly retrieved and 5 slow circle rotations were performed to dissolve the salt into the water 10. The beaker was left stable on the tripod. Whilst waiting for the water to boil, changes to the solution was carefully observed. Observations were recorded as qualitative data. When the whole surface of the water boiled, the tip of the thermometer was immediately placed at the centre of the beaker for 30 seconds. The degree of the water was then recorded. 11. In avoiding dangers, the blue flame was changed to the safe 12. The beaker tongs was used to remove the beaker from the tripod and the beaker was then placed away from the experiment area 13. The wash bottle was used to clean residues off the thermometer. 14. Steps 7-12 was then repeated for the rest of the beakers labelled; 10g; 20g; 30g; 40g; 50g 15. ...read more.