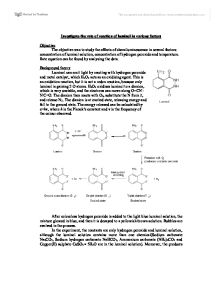 Investigate the rate of reaction of luminol in various factors Objective The objective was to study the effects of chemiluminescence in several factors: concentration of luminol solution, concentration of hydrogen peroxide and temperature. Rate equation can be found by analysing the data. Background theory Luminol can emit light by reacting with hydrogen peroxide and metal catalyst, which H2O2 acts as an oxidising agent. This is an oxidation reaction, but it is not a redox reaction, because only luminol is gaining 2 O atoms. H2O2 oxidises luminol to a dianion, which is very unstable, and the electrons can move along O=CN--N-C=O. The dianion then reacts with O2, substitute the N from it, and release N2. The dianion is at excited state, releasing energy and fall to the ground state. The energy released can be calculated by e=hv, where h is the Planck's constant and v is the frequency of the colour observed. After colourless hydrogen peroxide is added to the light blue luminol solution, the mixture glowed in blue, and then it is decayed to a yellowish brown solution. Bubbles are evolved in the process. In the experiment, the reactants are only hydrogen peroxide and luminol solution, although the luminol solution contains more than one chemical(Sodium carbonate Na2CO3, Sodium hydrogen carbonate NaHCO3, Ammonium carbonate (NH4)2CO3 and Copper(II) sulphate CuSO4 * 5H2O are in the luminol solution). Moreover, the products did not involve in the rate of reaction. The word and chemical equations of the reaction are concluded as follow(3): Luminol solution + Hydrogen peroxide ground state dianion + nitrogen + hv Luminol (aq) + H2O2 (aq) ground state dianion(aq) + N2 (g) + hv + 3H2O2 (aq) + 4H2O (l) + N2 (g) + hv The rate of reaction measures how fast the reactants are all reacted. Certain factors would affect the rate of reaction, they are temperature and concentration of different solution, catalysts and surface area. ...read more.

10cm3 Measuring cylinder It can measure different volume of solutions, to dilute to different concentration accurately. Dropper It can transfer small quantity of solution, e.g. 0.5cm3 Carbonates (Na2CO3, NaHCO3 and (NH4)2CO3) The carbonates salts are used to enhance the oxidation of luminol(6). Copper(II) sulphate CuSO4 * 5H2O It acts as a catalyst in the reaction. It also gives the luminol solution a colour of light blue. 5% hydrogen peroxide It is an oxidant and to oxidise luminol in this reaction. If higher percentage is used, the reaction is too fast to see. Moreover, the higher the percentage, the more irritating, it may even cause burns. Copper(II) Sulphate (CuSO4) Harmful Harmful if swallowed. Solutions equal to or stronger than 1M should be labelled HARMFUL. It may also be irritating to the eyes and skin and has been known to sensitise the skin. Danger to the environment It is very toxic to the aquatic environment and may cause long-term adverse effects. If swallowed: Vomiting normally ensues. Wash out the mouth and give a glass or two of water. Seek medical attention. If dust inhaled: Remove the victim to fresh air. If breathing is even slightly affected, seek medical attention. If solid or solution gets in eyes: Flood the eye with gently running tap water until a first-aider arrives. If spilt on skin or clothes: Remove contaminated clothing. Wash off the skin with plenty of water. Soak contaminated clothing repeatedly until the rinsing water is colourless. If spilt in laboratory: Scoop up as much as possible. Add water to the area, followed by mineral absorbent. Disposal Add to 10 litres of water and wash it down the foul-water drain with plenty of water. Store As a general chemical. Sodium carbonate (Na2CO3) Irritants Irritating to the eyes, skin and respiratory system. Sodium bicarbonate (NaHCO3) It has minimal hazards but would be harmful if intake in quantity. If swallowed: Wash out the mouth and give a glass or two of water. ...read more.

However, I have used 0.3M and 0.15M H2O2 in Investigation A. It could be better if only 0.3M H2O2 was used, it is because it can minimise the error on using volumetric flask, although it has small relative error. The procedure has been conduct 4 times to get a more reliable result than doing once or twice each investigation. A sample has been made to determine the end point of the reaction, by comparing the colour of the product mixture. Fair tests were performed such 2 variables were remained constant when 1 variable was being investigate. Limitation of procedure Effect(s) on result Modification(s) of the procedure to minimise the error Reason(s) for improving reliability, accuracy and precision Human reaction time at the instant of the reaction begins. The time of chemiluminescence recorded would take shorter than it should. The best thing could do is just start the timer when the luminol is pour to the hydrogen peroxide. This can compensate the human reaction time. The end point of the reaction was not clear. The time of chemiluminescence recorded would take longer. Using colorimeter, measuring the reading in a certain time interval (e.g. a 10-second interval) The end point would be clearer as the colour is not changing anymore. Temperature of solution varies when using water bath The result varies depends on the difference. For example, the temperature of 2 solutions drop below the desired temperature, the result obtained would be shifted up. Not using Bunsen burner, use a water bath, that can obtain constant temperature. The temperature of the water bath remains the same, the temperature would not raise higher or drop lower than then desired temperature. The following are the error of the equipments: 1. Weighing balance ?0.001g 2. Pipette ?0.06cm3 3. Volumetric flask ?0.15cm3 4. Timer ?0.01s 5. 10cm3 measuring cylinder ?0.01cm3 Sources: (1) Collision theory http://en.wikipedia.org/wiki/Collision_theory (2)Maxwell-Boltzmann distribution Chemical Ideas(Salters) P.223-225 (3) equation of luminol oxidation http://en.wikipedia.org/wiki/Chemiluminescence (4) The chemiluminescence of luminol http://www.chm.bris.ac.uk/webprojects2002/fleming/experimental.htm (5) Recipe of reaction http://www.cmste.uregina.ca/Quickstarts/oxidationofluminol.html (6) Enhancement of luminol chemiluminescence http://cat.inist.fr/?aModele=afficheN&cpsidt=17170909 ?? ?? ?? ?? ...read more.