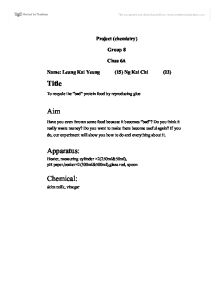 Investigating Glue. We expect the result the casein in milk and textured soy protein in soybean milk have comparable sticking strength as starch contained in commercial glue. The significant advantage of the production of our protein glues is that protei

Project (chemistry) Group 8 Class 6A Name: Leung Kai Yeung (15) Ng Kai Chi (22) Title To recycle the "bad" protein food by reproducing glue Aim Have you even thrown some food because it becomes "bad"? Do you think it really waste money? Do you want to make them become useful again? If you do, our experiment will show you how to do and everything about it. Apparatus: Heater, measuring cylinder �2(250ml&50ml), pH paper,beaker�2(300ml&500ml),glass rod, spoon Chemical: skim milk, vinegar Abstract The sticking properties of different proteins in daily food are being investigated in our experiment. Casein in dairy products and textured soy protein (TSP) in soybean products are abstracted out by precipitation in acid. The samples are then neutralized by carbonate and undergo a series of stress tests to compare the strength of our reproduced protein glues with commercial products. The basic principle of the sticking properties of protein glues is the ionic attractions and the Van der Walls' attractive force generated by the protein molecules. ...read more.

As we can see from ancient and medieval records, fish glue was both a common and important adhesive for many special applications; adapted by artists, it was used from the time of ancient Egypt to twentieth-century France, in painting media, coatings and grounds, in the gilding of illuminated manuscripts, and in pastel fixatives. 2)Theory of milk glue Casein is the principal protein found in cow milk (about 3%) from which it has been extracted commercially for most of the 20th century. It is responsible for the white, opaque appearance of milk in which it is combined with calcium and phosphorus as clusters of casein molecules, called micelles. The major uses of casein until the 1960s were in technical, non-food applications such as adhesives for wood, in paper coating, leather finishing and in synthetic fibers, as well as plastics for buttons, buckles etc. The first step in making acid-precipitated casein is acidification. Mineral acids or organic acids can add to the skim milk; or the milk is allowed to sour, in which case lactic acid, produced by fermentation of lactose, is the effective precipitant. ...read more.

3) Curds were allowed to settle to the bottom for about 10 minutes. 4) The heated mixture was filtered. 5) The curds were squeezed to remove liquid. 6) The curds were washed with little volume of water and squeezed again. 7) The curds were stirred with solid sodium hydrogencarbonate (NaHCO3) gradually and monitored pH by pH paper until pH became slightly alkali. �Testing of adhere strength of glue 1) The glues were used to stick two plywood together, a the plywood at downside , with contact surface of 20 cm2 2) Two samples were made for each glue and one sample of starch glue was made as control. 3) The stack plywood was pressed by 0.8kg mass and allowed to dry at dry place for 2 days . 4) The plywood was set above the ground. 5) 0.5 kg Test mass was added gently each time until the masses drop. 6) The maximum mass of the glues that can afforded were recorded. 7) The plywood was cut into 4, which contact surface was decreased 4 times, and the above tests were repeated. Reference 1)http://classes.ansci.illinois.edu/ansc438/milkcompsynth/milkcomp_protein.html 2)http://science-in-farming.library4farming.org/Crops-Grains-Protein/PROTEINS-ARE-BASIC/Milk-Proteins.html ...read more.