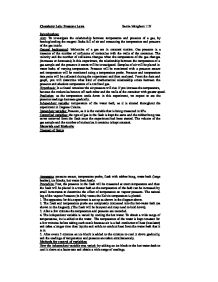 Chemistry Lab: Pressure Laws Samia Murgham 11N Introduction: Aim: To investigate the relationship between temperature and pressure of a gas, by heating/cooling the reagent flasks full of air and measuring the temperature and pressure of the gas inside. General background: Molecules of a gas are in constant motion. Gas pressure is a measure of the number of collisions of molecules with the walls of the container. The velocity and the number of collisions changes when the temperature of the gas changes (increases or decreases) In this experiment, the relationship between the temperature of a gas sample and the pressure it exerts will be investigated. Samples of air will be placed in water baths of varying temperature. Pressure will be monitored with a pressure sensor and temperature will be monitored using a temperature probe. Pressure and temperature data pairs will be collected during the experiment and then analyzed. From the data and graph, you will determine what kind of mathematical relationship exists between the pressure and absolute temperature of a confined gas. Hypothesis: In a closed container the air pressure will rise if you increase the temperature, because the molecules bounce off each other and the walls of the container with greater speed. Prediction: as the temperature cools down in this experiment, we expect to see the pressure readings decrease gradually. ...read more.

Pressure varies as (speed). A gas molecule's motion energy (KE) which clearly increases with temperature might be a good way of measuring temperature itself." Evaluation of procedures - The pressure in the flask could have been slightly affected by body heat, as the flask is held into the water my hand, and this could further increase the kinetic energy of the gas molecules in the flask thus leading to an increase in pressure. - The flask may not have fully conducted heat to equal that of the water-bath and the readings taken could have been different from that in the flask. - The volume of water in the water-bath over the surface area of the flask could have increased or decreased some of the data obtained as parts of the flask could not be fully immersed in the water. Improvements: - Instead of holding the flask into the water-bath by hand, a clamp may be used to keep the flask in place - The flask should be held in the flask for a longer time before taking temperature readings to allow the gas to conduct enough heat because air is a bad conductor of heat (insulator) and takes a longer time than liquids and solids to conduct heat from the water bath that it is in. - The flask should be immersed in a constant depth of water so that the same surface area of the flask can be exposed to the water ensuring better conduction of heat. ...read more.