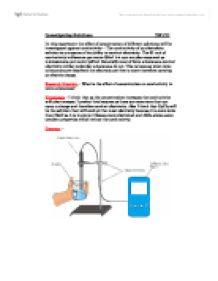 Investigating Solutions. In this experiment the effect of concentration of different solutions will be investigated against conductivity The conductivity of an electrolyte solution is a measure of its ability to conduct electricity.

Investigating Solutions 29/1/11 In this experiment the effect of concentration of different solutions will be investigated against conductivity - The conductivity of an electrolyte solution is a measure of its ability to conduct electricity. The SI unit of conductivity is Siemens per meter (S/m) but can me also measured as microsiemens per meter (�S/m). Generally most of Ionic substances conduct electricity whilst molecular substances do not. This is because when ionic substances are dissolved; the electrons are free to move therefore carrying an electric charge. Research Question - What is the effect of concentration on conductivity in ionic substances? Hypothesis - I think that as the concentration increases the conductivity will also increase. I predict this because as there are more ions that can carry a charge and therefore conduct electricity. Also I think that CaCl2 will be the solution that will conduct the most electricity because it is more ionic than NaCl as it is in group 2 (looses more electrons) and AlCl3 shows some covalent properties which reduce the conductivity. Diagram - Equipment - * Lab Quest * Conductivity probe (set to a range of 0-2000 �S.m) * Utility clamp and stand. * Dropper bottle of distilled water * 100cm3 empty beaker * 400ml of 1M NaCl * 400ml of 1M CaCl2 * 400ml 1M AlCl3 * 100cm3 measuring cylinder Risk Assessment - * Wear goggles at all times, especially when handling the chemicals. ...read more.

E.g. for 0.8 M measure 80ml of NaCl and 20 ml of distilled water. For 0.6 M measure 60ml of NaCl and 40 ml of distilled water. And so on. 6. Repeat steps 2-5 for the other 2 solutions (CaCl2 and AlCl3) Results - Table 1. Conductivity results for the 5 concentrations of each of the 3 salts, NaCl, CaCl2 and AlCl3 Conductivity/ �S.m Concentration / M NaCl CaCl2 AlCl3 0.2 32,930 33,152 33,53 0.4 33,151 32,917 33,782 0.6 33,689 33,287 34,022 0.8 33,893 33,818 34,084 1 33,812 34,203 34,705 Qualitative results: Some unexplained viscosity was observed halfway through calcium chloride and all the way through aluminium tetrachloride. Conclusion and Evaluation- Two conclusions can be taken directly from this investigation and its results: * Generally, as the concentration of the solution increases, so does the conductivity. There is a significant difference in values of conductivity as the concentration increases. Therefore there is a direct link between conductivity and concentration of solution. * A further side conclusion that can be derived from this experiment relates to how ionic the three salts are. It is obviously seen that Aluminium tetrachloride is the most ionic as its conductivity was highest at all concentrations; yet, there is a strange relationship between sodium chloride and calcium chloride as seen on the graph. For the first conclusion, I believe I have sufficient data in order to accept that there is a significant difference (Even though there are a few anomalies which will be discussed later). ...read more.

Even though anomalous results were found generally the conductivity of each salt increased proportionally to increasing concentrations. The last result, 1M, of NaCl was lower than that of 0.8M: 33,893 -->33,812. The first result of CaCl2, 0.2M, was higher than the second result, 0,4M: 33,152-->32,917. These are hard to explain why they happened but it can be due to human errors such as measuring the amount of solution or distilled water in the measuring cylinder wrongly. Another reason would be shaking the solution; if the solution when shaken when the probe was reading the value would increase. Therefore some solutions could have been shaken more than others. One way to improve this would be to by putting the probe into the beaker which would be still on the table and let it be for some seconds. In order to decide the second conclusion with more confidence I believe that at least 2 repeats for each salt should have been made which should prove to decrease uncertainties about the conclusion and increase the reliability of data. Overall some errors and anomalies can be explained, some not and others we do not know for certain. In all I believe the effect of the anomalous results on the investigation was insignificant for the first conclusion and can be explained with human errors however the repeats for the second conclusion should be made. Still I believe the data is reliable and that this investigation and research was effective and efficient as a whole to show that conductivity increases as concentration of the solutions increases. ...read more.