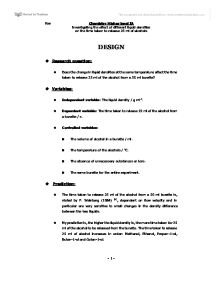 Overall there are 15 times to add 25 alcohol samples since I decide to investigate 5 different alcohols. The more time I need to add more alcohols into the burette, the more likely inaccuracies to occur. * Improving the investigation: * The procedures can be partially replaced by computer data logging suggested by Laurence Rogers (1995) [5] to prevent uncertainties from human errors when stopping the watch. The experiment can be programmed to collect the data (Time taken for 25 ml of the alcohol to be released from the burette) automatically. * More alcohols with liquid densities within the ranges (The lowest value: 0.789 g ml-1 & the highest value: 0.826 g ml-1) can be tested to fill the 2 gaps between methanol and propan-1-ol, butan-1-ol and octan-1-ol in the presented graph. For instance, penta-1-ol has the liquid density of 0.815 g ml-1 at 20 oC (293 K) [6]. * Pure alcohols should be bought in the same concentration to ensure the reliability of the collected data. Otherwise, diluting the alcohols to the same concentration can be less expensive, yet time consuming. * A larger burette, for instance, with measuring volume of 75 ml (only 2 times to add 5 alcohol samples, 25 ml each) will reduce the times need to pour more alcohols into the burette to 10. Not only this change in equipment may save time of experimenting, but also minimise the uncertainties. ...read more.