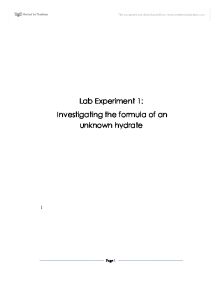 Investigating the formula of an unknown hydrate

Lab Experiment 1: Investigating the formula of an unknown hydrate ] Purpose: To determine the formula of an unknown hydrate using the mass of the hydrate before and after heating to help you. Background Information: Water is a part of many solid ionic compounds. Such compounds are known as hydrates and the water they contain is known as water of hydration. The water of hydration can be driven off by heating the hydrated crystals. The salt that remains after the water is gone is known as the anhydrous salt. In this experiment you will determine the formula of a hydrate. Apparatus: - Crucible - Spatula - Balance � 0.01g - Bunsen burner - Tripod - Wire - Gauze - Crucible tongs - Up to 8 grams of the unknown hydrate. Independent variable: The temperature of the compound. Dependant Variables: The mass of the materials and compound before heating and after. ...read more.

One group received 0 while one had 2. This is clearly due to the sources of errors that may have occurred in their experiments. The possible sources off error in this experiment may include: - An appropiate amount of the unknown hydrate may have not been used. - It wasnt left on the heater for enough time to allow complete water loss. - Material used may have been tampered with and so would affect the overall results. - Wrong measurements were taken. - Although my experiment was successful, many improvement could have been made to both my experiment and too the experiment. This includes: - Repeating the measurements for more trials so that more accurate answers could be found. - Using an accurate method to measure the mass, so as to reduce the errors in the experiment. - Make sure that none of the compound is accidentally spilled out. ?? ?? ?? ?? Page 1 ...read more.