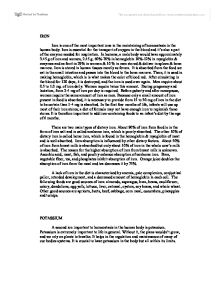 Ions important to human health - Iron is one of the most important ions in the maintaining of homeostasis in the human body.

IRON Iron is one of the most important ions in the maintaining of homeostasis in the human body. Iron is essential for the transport of oxygen in the blood and it's also a part of the enzyme needed for respiration. In humans, a male body would have approximately 3.45 g of iron and women, 2.45 g. 60%-70% in hemoglobin 10%-12% in myoglobin & enzymes and as ferritin 29% in women & 10 % in men stored & deliver in spleen & bone marrow. Iron is stored in human tissues mostly as ferron. It is absorbed from the food we eat in the small intestine and passes into the blood to the bone marrow. There, it is used in making hemoglobin, which is is what makes the color of blood red. After circulating in the blood for 120 days, it is destroyed, and the iron is used over again. Men require about 0.5 to 1.0 mg. of iron daily. Women require twice this amount. During pregnancy and lactation, from 2-4 mg of iron per day is required. Before puberty and after menopause, women require the same amount of iron as men. Because only a small amount of iron present in food is absorbed, it is necessary to provide from 15 to 30 mg of iron in the diet to be certain than 1-4 mg is absorbed. ...read more.

Interestingly enough in an article on the internet a woman asked what the best source of natural potassium was. The typical response to this question is bananas, but in doing some research they found that a single potato contains 800 mg. This is about 350mg more than would be found in any banana. ZINC Zinc is an essential ion for the maintenance of homeostasis in the human body. Our bodies contain about 2-3 grams of zinc. About 90% of zinc is found in the muscles and bones. It's also found in the prostate gland and semen in men. Zinc is necessary division and body growth and plays an important role during pregnancy. A growing fetus needs Zinc in order for the cells to rapidly divide. Zinc also helps to avoid pre-term pregnancies and fetus abnormalities. Zinc again stimulates growth for infants, kids, and teens. In men, zinc helps protect the prostate gland from all kinds of infections and prostatic hypertrophy (enlargement). It helps maintain sperm count and testosterone levels. In women, zinc can help with menstruation such as alleviating the symptoms connected to PMS. In the immune system it plays a role in fighting off infections like pneumonia, diarrhea, and even the common cold. It helps in the sense of taste and smell by activating our taste and smell sensors. ...read more.

Osteoporosis affects one in four women and one in eight men over the age of 50. As we age, we all lose some bone mass. Whether or not you get osteoporosis later in life depends on how big and dense your bones become during your developing years, and how much bone mass you lose after that. If you start off with bigger and denser bones and if you lose bone mass as you get older, you will have more left in later years. Dairy products are the major source of calcium. Eggs, green leafy vegetables, broccoli, legumes, nuts, and whole grains provide calcium but in smaller amounts than dairy products.Only about 10-30% of the calcium in food is absorbed into the body. Calcium must be broken down by the digestive system before the body can use it. Calcium is absorbed into the body in the small intestine. The absorption of calcium is influenced by such factors as the amount of vitamin D hormone in the body and the level of calcium already present in the bloodstream. The "fizz" in fizzy drinks like soda and Champagne inhibits the absorption of calcium and takes calcium out of the bones.About 99% of the body's calcium is stored in bone tissue. The remaining 1% of the body's calcium circulates in the blood and other body fluids.Calcium in the bloodstream plays an important role in blood clotting, transmission of nerve impulses, muscle contraction, and other metabolic activities. In the bloodstream, calcium maintains a constant balance with phosphate. ...read more.