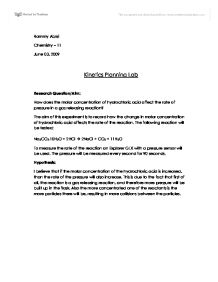 Kinetics Lab. How does the molar concentration of hydrochloric acid affect the rate of pressure in a gas releasing reaction?

Rammy Abssi Chemistry - 11 June 03, 2009 Kinetics Planning Lab Research Question/Aim: How does the molar concentration of hydrochloric acid affect the rate of pressure in a gas releasing reaction? The aim of this experiment is to record how the change in molar concentration of hydrochloric acid affects the rate of the reaction. The following reaction will be tested: Na2CO3 10H2O + 2HCl --> 2NaCl + CO2 + 11H2O To measure the rate of the reaction an Explorer GLX with a pressure sensor will be used. The pressure will be measured every second for 90 seconds. Hypothesis: I believe that if the molar concentration of the hydrochloric acid is increased, than the rate of the pressure will also increase. This is due to the fact that first of all, the reaction is a gas releasing reaction, and therefore more pressure will be built up in the flask. Also the more concentrated one of the reactants is the more particles there will be, resulting in more collisions between the particles. Variables: Type of Variable Variable Range of Values/Method of Control Independent Variable Concentration of Hydrochloric Acid 0.50 molar, 0.75 molar, 1.0 molar Dependent Variable Rate of kPa Explorer GLX - records every second Controlled Mass of Sodium Carbonate-Deca-Hydrate 0.50 grams Temperature of Reaction All reactions occur at 22�C (room temperature) ...read more.

This tangent line will show the rate of the reaction (sufficient relevant data). Results: The graphs from the GLX explorer are shown in the appendix at the end of the lab roport. A tangent line (slope line) was used on the beginning of the graphs to get the rate of the reaction. The slope of the tangent line would be the rate of the reaction at the point where the tangent line meets the curve. Table 1: The Rate of the Reaction Concerning the Concentration of the Hydrochloric Acid Concentration (moles) � 0.01m Rate of Reaction (kPa/s) � 0.05 kPa/s Trial 1 Trial 2 Trial 3 Average 0.50 1.0 1.0 1.0 1.0 0.75 1.0 2.0 1.0 1.3 1.00 2.0 2.0 3.0 2.3 Qualitative Results: * The reaction released a lot of gas. I noticed this because at first the reaction was being done in a test tube and then the one-hole stopper popped off in the middle of the reaction, resulting in a switch to use a flask. * When the molarity of the hydrochloric acid was higher, there was a much louder fizzing noise, indicating a faster reaction. * For some cases no all the sodium carbonate-deca-hydrate reacted fully. ...read more.

substance, than the surface area of those 0.50 grams would be less than the surface area of the trial that had all powder substance. With a larger surface area there would be fewer collisions which would make the rate of the reaction slower. Directly affecting the results, this limitation would need to be improved. A realistic improvement to this experiment would be to simply use a bowl and crush all the sodium carbonate-deca-hydrate to powder. Therefore, there would be no big pieces and the surface area would be relatively the same in each trial. Another limitation to this experiment would be the fact that the sodium carbonate-deca-hydrate was poured into the test tube right before the one hole stopper was placed on the test tube. Therefore, there was a small time frame where gas was lost. This would affect the pressure in the test tube. One simple way to improve this limitation would be to use a special test tube. with this special test tube there should be a small hole on the side where another tube comes out and that is where the sodium carbonate-deca-hydrate would be placed in. Therefore, there would be minimal or no gas escaping and the results would not be affected by a drop in pressure. ...read more.