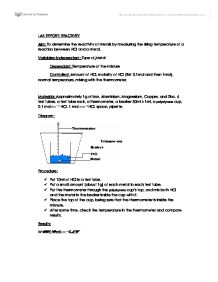 LAB REPORT: REACTIVITY Aim: To determine the reactivity of metals by measuring the rising temperature of a reaction between HCl and a metal. Variables: Independent: Type of Metal Dependant: Temperature of the mixture Controlled: Amount of HCl, molarity of HCl (first 0.1mol and then 1mol), normal temperature, mixing with the thermometer. Materials: Approximately 1g of Iron, Aluminium, Magnesium, Copper, and Zinc. 6 test tubes, a test tube rack, a thermometer, a beaker 50ml � 1ml, a polystyrene cup, 0.1 mol HCl, 1 mol HCl, spoon, pipette. Diagram: Procedure: * Put 10ml of HCl in a test tube. * Put a small amount (about 1g) of each metal in each test tube. * Put the thermometer through the polystyrene cup's top, and mix both HCl and the metal in the beaker inside the cup with it. * Place the top of the cup, being sure that the thermometer is inside the mixture. ...read more.

* Maybe metals or HCl weren't pure. Improvements: * Do not stir, or try to do it constantly. * Leave the reaction alone for about 10 minutes. * Fill any hole of the polystyrene cup with plasticine. * Try to read the thermometer in the straightest position so as to read it the most perpendicularly possible, and the more accurate. * Weight metals so as to use the same mass of each in each experiment. * Let the thermometer cool down to its original T� or use six different ones. * Repeat the experiment several times with the same molarity of HCl. Conclusion: The results were not as expected due to many errors. We repeated the experiment twice and in both cases we got the same material being the most reactive and vice versa, but our errors were in both cases the same, and we got the same trend in both cases. The most probable explanation is that substances weren't pure enough. ...read more.