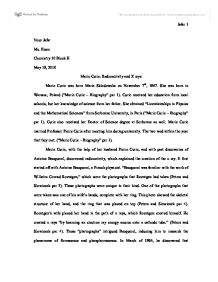 Nour Jafar Ms. Elsen Chemistry 10 Block H May 18, 2010 Marie Curie: Radioactivity and X rays Marie Curie was born Marie Sklodowska on November 7th, 1867. She was born in Warsaw, Poland ("Marie Curie - Biography" par 1). Curie received her education from local schools; but her knowledge of science from her father. She obtained "Licentiateships in Physics and the Mathematical Sciences" from Sorbonne University, in Paris ("Marie Curie - Biography" par 1). Curie also received her Doctor of Science degree at Sorbonne as well. Marie Curie married Professor Pierre Curie after meeting him during university. The two wed within the year that they met. ("Marie Curie - Biography" par 1). Marie Curie, with the help of her husband Pierre Curie, and with past discoveries of Antoine Becquerel, discovered radioactivity, which explained the creation of the x ray. It first started off with Antoine Becquerel, a French physicist. "Becquerel was familiar with the work of Wilhelm Conrad Roentgen," which were the photographs that Roentgen had taken (Peters and Slowiczek par 3). These photographs were unique in their kind. One of the photographs that were taken was one of his wife's hands, complete with her ring. ...read more.

The Curies used Becquerel's note on how air could be a conductor of electricity because of uranium, as well as using sensitive instruments created by Pierre and his brother. On February 17, 1898, an ore of uranium, pitchblende, was tested by the Curies. Time and time again, the result was that the pitchblende created a current 300 times stronger than pure uranium. The Curies thus came up with the conclusion that an active unknown substance, as well as the uranium, still exists in the pitchblende (Peters and Slowickez par 8). The "hypothesized" element was named polonium, in honour of Curie's native land, Poland; they labelled this element "radio-active," as well as introducing this term. The Curies were able to extort enough polonium and radium, which is another radioactive element, establishing the chemical elements of both. Marie Curie worked alongside Pierre, "to establish the first quantitative standards by which the rate of radioactive emission of charged particles from elements could be measured and compared" even after her husband died (Peters and Slowickez par 9). Curie also managed to discover that there was a decrease in the radioactivity, and it could be predicted, since can be calculated; as well as the realization of which radiation is atomic property of matter, rather than a separate independent emanation (Peters and Slowickez par 9). ...read more.

Radioactivity is used to harness the energy of U-235 to create nuclear power for a source of electricity, as well as radiation treatments. The limitations of x rays and radioactivity include raise the risk of cancer infecting the body, damaging the cells, causing cell mutations, birth defects, among other things as well ("Pros and Cons of X-rays" par 2). Scientists' contributions have improved some aspects of society. One aspect of society would be politically. X rays are now being used in airports to check baggage for any weaponry; or anything that could be made into an explosive. All of these measures are being taken due to the terrorist bombing of September 11, 2001. Security measures have tightened up since then, and are becoming stricter ever since, since there are increasing amounts of terrorist threats to hijack planes, or bomb planes (Eaton par 7). Another contribution that is effected is social aspects. X rays and radioactivity affect people's health in numerous ways. They can either help damage a person's health, or help correct. Radioactivity can cause mutations, birth defects, and many other problem, while an x ray can help correct a broken bone, or decaying tooth by showing the area of damage, so doctors can take proper procedures. ...read more.