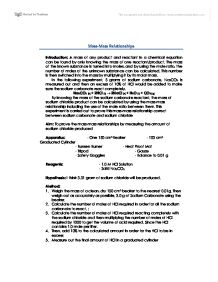 Mass-Mass Relationships Introduction: A mass of any product and reactant in a chemical equation can be found by only knowing the mass of one reactant/product. The mass of the known substance is turned into moles, and by using the mole ratio, the number of moles of the unknown substance can be calculated. This number is then switched into the mass by multiplying it by its molar mass. In the following experiment, 3 grams of sodium carbonate, Na2CO3 is measured out and then an excess of 10% of HCl would be added to make sure the sodium carbonate react completely. Na2CO3 (s) + 2HCl (l) ...read more.

Remove the beaker from the oven and determine the mass. Results: Mass of empty beaker 90.85g Mass of the beaker with Na2CO3 93.85g Mass of Na2CO3 3.0g Molar mass of Na2CO3 105.99g/mol Moles of Na2CO3 0.0283 mol Moles of HCL required to react completely with Na2CO3 0.0566 mol Volume of HCl required 62.3 cm3 Mass of the dry beaker and product NaCl 100.02g Mass of NaCl recovered 9.17g Expected mass of NaCl 3.31g Percentage error 63.9% - Effervescence occurred when the acid reacted with the sodium carbonate Conclusion: The mass of sodium chloride produced, 9.17g was three times the amount of the expected mass, 3.31g, giving a 63.9% percentage error. Evaluation: This experiment could be improved by using a much more accurate weighing balance and making sure that all the water has been completely evaporated to give a pure anhydrous sodium chloride. ...read more.