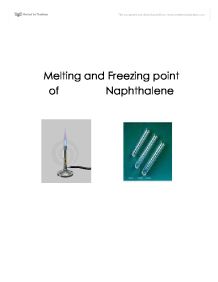 Melting and Freezing point of naphthalene

Melting and Freezing point of Naphthalene Research Question 1. What is the specific temperature for the melting point and freezing point of naphthalene? Background During the lab experiment, we are going to place the Naphthalene on the gauze mat which will be kept above the Bunsen burner using a retort stand. A matter can be classified as solid, liquid, or gas and they are known as the three states of matter. We know that particles during the melting process move faster than particles that are in the solid state due to their high kinetic energy. Particles also move slower as the matter changes back into solid due to solid's low amount of kinetic energy. Kinetic energy is the energy that makes the particles move. When the matter is in its solid state, the particles are stuck together in such a way that they do not move; however, when matter is in its liquid state the particles slide over each other. ...read more.

The particles do though increase its motion as it turns to liquid and decreases because it gets tightly packed with other particles when it transforms back into a solid which decreases its motion. Evaluation The main purpose of this experiment was to find out the melting and freezing point of naphthalene. One of our weaknesses was directly resulted because of the human errors we made. When we were timing, we recorded the time exactly right when it hit the 30s interval. This made a huge error because it took us time to read the temperature shown and to record it. So we suggest that others should first start looking at the thermometer 2s before each 30s interval so that you can get a more precise measurement with less amount of human error. The materials that we used for finding out the melting point and the freezing point of Naphthalene helped benefit in having a more accurate measurement. But the only the thing we could have improved on was the thermometer. We could have used an electronic thermometer to get a more precise and more accurate measurement to find the melting and freezing point of naphthalene. ...read more.