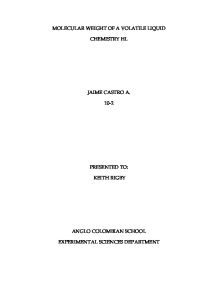 CONCLUSION: Taking in count that the liquid used in this experiment was a cycloalkane and that the empirical formula of cycloalkanes is, we can determine what cycloalkane was used by just dividing the molar mass of the liquid by the empirical mass of cycloalkanes. The result of this division was 7.1 which tells us that the molecular formula for the cycloalkane used in the experiment is which is the molecular formula for cycloheptane, therefore we can conclude that the cycloalkane used in this practical was cycloheptane. EVALUATION: The total percentage uncertainty of this practical was of 2.05% which is a really small percentage which makes our results very accurate. However I can suggest repeating the practical for 2 or 3 times so that an average of the results can be obtained and the possibility of a random error can be reduced. ?? ?? ?? ?? ...read more.