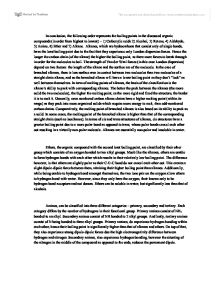 In conclusion, the following order represents the boiling points in the discussed organic compounds (in order from highest to lowest) - 1) Carboxylic acids 2) Alcohol, 3) Ketone, 4) Aldehyde, 5) Amine, 6) Ether and 7) Alkane. Alkanes, which are hydrocarbons that consist only of single bonds, have the least boiling point due to the fact that they experience only London dispersion forces. Hence the longer the carbon chain (of the alkane) the higher the boiling point, as there more forces to break through in order for the molecules to boil. The strength of Van der Waal forces (in this case London dispersion) depend on two factors: the length of the alkane and the surface are of the molecule. In the case of branched alkanes, there is less surface area in contact between two molecules than two molecules of a straight chain alkane, and so the branched alkane will have a lower boiling point as they don't "lock" as well between themselves. ...read more.

This creates a slight dipole-dipole force between them, attaining their higher boiling point than alkanes. Additionally, while being unable to hydrogen bond amongst themselves, the two lone pair on the oxygen allow ethers to hydrogen bond with water. However, since they only have the oxygen, their known only to be hydrogen bond acceptors and not donors. Ethers can be soluble in water, but significantly less than that of alcohols. Amines, can be classified into three different categories - primary, secondary and tertiary. Each category differs by the number of hydrogens in their functional group. Primary amines consist of NH2 bonded to an alkyl. Secondary amines consist of NH bonded to 2 alkyl groups. And lastly, tertiary amines consist of N being bonded to three alkyl groups. Primary amines, do experience hydrogen bonding within each other, hence their boiling point is significantly higher than that of alkanes and ethers. ...read more.