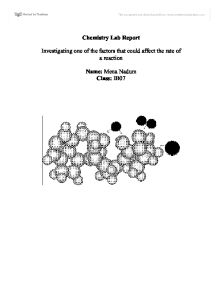 Our aim is to design a practical investigating how that effect alters the speed of the reaction in a chemical reaction between magnesium and hydrochloric acid.

The time for the reaction was took and recorded. The experiment continued using four different surface areas and the surface areas were varied basically by taking the same size of magnesium ribbon and cutting it into 4 pieces in the second trail, and into 8 pieces in the third trail, while in the last two trails pebbles and powder of magnesium were used. Each of the five trails was repeated four times for the accuracy. From the chemical reaction between the magnesium and the hydrochloric acid, Hydrogen bubbles were formed and the magnesium was dissolved in the acid forming MgCl according to the equation: Mg + 2HCl � H2 + MgCl2 (a): the reaction between a magnesium ribbon and HCl (b): reaction of Mg powder and HCl Figure2 (a) (b): the reaction Mg-HCl Data collection was gathered from this investigation: Table row data between the timing of the reaction in different surface areas of 0.03g of Magnesium Types Of Surface Areas Of Mg/ 0.03g Time 1 t/s �0.01s Time 2 t/s �0.01s Time 3 t/s �0.01s Time 4 t/s �0.01s Av. ...read more.

A lot of mistakes could be predicted for this kind of experiments. One of them is the time taking was not accurate although many trails were repeated, the uncertainty is still big; and the reason is when using the hands for the stopwatch to start and stop, the response for pressing the start or the stop button may not be fast enough when the reaction is begun or ended. Another thing is that sometimes you can not see if the bubbling of the hydrogen is done or still so you do not know whether the reaction is fully completed or still carrying on; hence the time taken will be wrong. All those errors could have led to inaccuracy of the measurements. Except that the experiment wasn't so hard to perform and to do some improvements I would recommend examining a larger mass of magnesium because the time for the reaction will be longer and more options of surface areas will be available, hence the relationship between the quantities will be more obvious. ...read more.