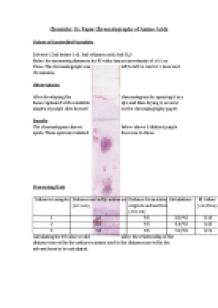 ï»¿Chemistry IA: Paper Chromatography of Amino Acids Values of Controlled Variables Solvent: 12ml butan-1-ol, 3ml ethanoic acid, 6ml H2O Ruler: for measuring distances for Rf value has an uncertainty of ±0.1cm Time: The chromatograph was left to left to run for 1 hour and 25 minutes. Observations After developing the chromatogram by spraying it in a fume cupboard with a suitable dye and then drying it, several shades of purple dots formed on the chromatography paper. Results The chromatogram shown below shows 3 distinct purple spots. These spots are labeled from one to three. Processing Data Unknown sample number Distance moved by amino acid (±0.1cm) Distance from amino acid origin to solvent front (±0.1cm) Calculations Rf values (±0.20cm) 1 1.6 9.5 2.5/9.5 0.16 2 2.5 9.5 3.3/9.5 0.26 3 7.0 9.5 7.0/9.5 0.74 Calculating the Rf value would allow the relationship of the distance moved by the unknown amino acid to the distance moved by the solvent front to be calculated. Data table showing Rf values of the unknown samples After the Rf values for the unknown samples have been obtained, we can now compare it with actual Rf values of the actual amino acids used. The following table compares obtained values and actual values and the amino acids: Unknown sample number Rf values obtained Literature values Amino Acid 1 0.16 0.14 Lysine 2 0.26 0.24 Aspartic Acid 3 ...read more.

Unknown sample 2 had a value of 0.26, which was closest to the amino acid, aspartic acid. Finally, unknown sample three had the highest Rf value of 0.74, which was closest to leucine (0.73). This indicates that unknown sample 1 is lysine, unknown sample 2 is aspartic acid and unknown sample 3 is leucine. The distance travelled by the amino acids shows how much the amino acid is attracted to the chromatography paper. Lysine travelled the least, which means that this sample was very attracted to the paper and not as much to the solvent as it did not move up the paper, thus resulting in a low Rf value. On the other hand, leucine has the highest Rf value which means that leucine was more attracted to the solvent than the paper thus moved higher up the chromatography paper. However, the literature values of the amino acids differ from the Rf values I have obtained from the experiment. To calculate the validity of my results, I will be comparing the literature values against the experimental values I have obtained for all three amino acid samples. Percentage difference = (experimental value ? literature value) literature value x 100 Amino Acid Sample Calculations Percentage difference Lysine ((0.16-0.14)/0.14) x 100 14.2% Aspartic acid ((0.26-0.24)/0.24) ...read more.

It was very difficult trying to get the diameter of each spot as small as possible with the capillary tube as the sample sometimes comes out of the tube very quickly. The larger the spots is, the less accurate the chromatogram will come up as the spots may blend in with each other. . Instead of using a capillary tube to drop the sample onto the chromatography paper, a micropipette should be used. A micropipette would allow the sample to be released in specific quantities allowing for smaller droplets. By having spots with a smaller diameter, the samples after the experiment will be more discrete. As soon as the purple spots were identified on the chromatogram after it has been dried, I immediately circled the spots in order to identify the amino acids. However, the chromatogram further developed after it has been dried. So the purple spots have spread further than where I first circled the dots. This will affect the calculation of the Rf value as the center of the circle may be different, thus affecting the distance measured. Wait a while longer after the chromatogram has been developed and dried to allow the purple spots to spread. Minor systematic errors caused by uncertainties from equipment such as the burette, pipette, beakers etc. that may cause final reading to be imprecise. Improve number of trials of the experiment to reduce these errors Evaluation ...read more.