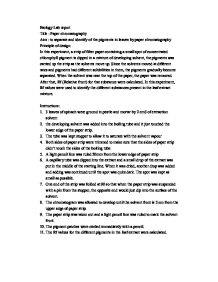 Biology Lab report Title : Paper chromatography Aim : to separate and identify of the pigments in leaves by paper chromatography Principle of design: In this experiment, a strip of filter paper containing a small spot of concentrated chlorophyll pigment is dipped in a mixture of developing solvent, the pigments was carried up the strip as the solvents move up. Since the solvents moved at different rates and pigments had different solubilities in them, the pigments gradually become separated. When the solvent was near the top of the paper, the paper was removed. After that, Rf (Relative front) for that substance were calculated. In this experiment, Rf values were used to identify the different substances present in the leaf extract mixture. Instructions: 1. 3 leaves of spinach were ground in pestle and mortar by 2 cm3 of extraction solvent 2. the developing solvent was added into the boiling tube and it just touched the lower edge of the paper strip. ...read more.

8. The chromatogram was allowed to develop until the solvent front is 2 cm from the upper edge of paper strip. 9. The paper strip was taken out and a light pencil line was ruled to mark the solvent front. 10. The pigment patches were circled immediately with a pencil. 11. The Rf values for the different pigments in the leaf extract were calculated. Results: The distance that the solvent travels = 9.3cm Rf of the top yellow spot = 8.9/ 9.3 = 0.96cm Rf of the middle orange spot = 6.8/ 9.3 = 0.73cm Rf of the bottom bright green spot = 5.7/9.3 = 0.61cm Rf of the lowest green spot = 4.4/9.3 = 0.47cm Therefore the top yellow spot is carotene pigment, the middle orange spot is xanthophyll pigment, the bottom bright green spot is chlorophyll a pigment, and the lowest green spot is chlorophyll b pigment. ...read more.