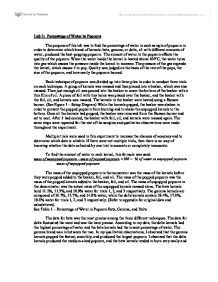 Percentage of Water In Popcorn

Lab 2: Percentage of Water in Popcorn The purpose of this lab was to find the percentage of water in each sample of popcorn in order to determine which brand of kernels: beta, gamma, or delta, all with different amounts of water, produced the best-popping popcorn. The amount of water in the popcorn affects the quality of the popcorn. When the water inside the kernel is heated above 100�C, the water turns into gas which causes the pressure inside the kernel to increase. The pressure of the gas expands the kernel, which causes it to pop. Quality was judged on the basis of the rate of the pops, the size of the popcorn, and how easily the popcorn burned. Each technique of popcorn was divided up into three piles in order to conduct three trials on each technique. A group of kernels was massed and then placed into a beaker, which was also massed. Then just enough oil was poured into the beaker to cover the bottom of the beaker with a thin film of oil. A piece of foil with tiny holes was placed over the beaker, and the beaker with the foil, oil, and kernels was massed. The kernels in the beaker were heated using a Bunsen burner. ...read more.

When compared to the class average, the average of my data was rather accurate. To find the percent error, this formula was used: Percent Error = ? theoretical value - actual value ? � 100 Theoretical value My percent error for beta, gamma, and delta kernels was 0.90%, 4.46%, and 13.5% respectively. (See calculations in appendix) See Table 2 - Percent Error This percent error could have occurred while massing. Since there were several balanced used instead of just one, the masses could have differed. One balance was used for the kernels, while the beaker mass was found using a separate balance. The different balances could have lowered the accuracy of the masses. Another place where mass could have been inaccurate was when the popcorn was popped. Sometimes the popcorn was burned, while other times the popcorn was popped perfectly. If the popcorn was burnt, the mass was lowered by the release of CO2. Also, the duration of the heating of the popcorn was inconsistent. Since the popcorn of the same technique would still pop at different rates, it is impossible to control the time of the heating. But the longer the beaker is heated, the longer the oil inside is also heated and evaporating. ...read more.