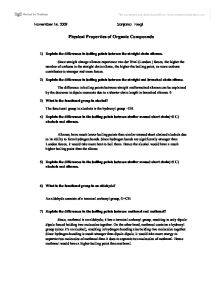 Explain. The difference in boiling points of methoxymethane and ethanol is that ethanol has a hydrogen atom attached directly to an oxygen and so hydrogen bonding can occur between ethanol molecules. However, in methoxymethane, there aren't enough hydrogens for hydrogen bonds to form. Hence the boiling point of ethanol is significantly higher. The same concept can be applied to comparing methoxyethane with propanol. 22) Compare the cis to trans- 2-butene isomers and pentane to neopentane. Explain the differences in boiling and melting points. Between the cis and trans isomers 23) Compare the structures of cis-1,2-dichloroethene and trans - 1,2 -dichloroethene. Explain the differences in boiling and melting points The difference between the two can be explained by the fact that in cis form, there are 2 polar C-Cl dipole moments, giving an overall molecular dipole and so when it bonds with other molecules, there are dipole-dipole forces as well as London dispersion which increases the boiling point. However, in the trans form, the two C-Cl bond moments cancel and the molecule is rendered non-polar and so there are no dipole-dipole forces involved hence a lower boiling point. ?? ?? ?? ?? November 14, 2009 Sanjana Negi ...read more.