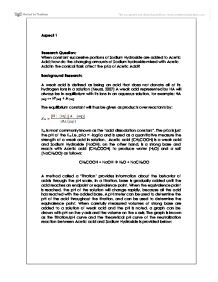 pKa. When constant successive portions of Sodium Hydroxide are added to Acetic Acid; how do the changing amounts of Sodium hydroxide mixed with Acetic Acid in the conical flask affect the pKa of Acetic Acid?

Aspect 1 Research Question: When constant successive portions of Sodium Hydroxide are added to Acetic Acid; how do the changing amounts of Sodium hydroxide mixed with Acetic Acid in the conical flask affect the pKa of Acetic Acid? Background Research: A weak acid is defined as being an acid that does not donate all of its hydrogen ions in a solution (Neuss, 2007) A weak acid represented by HA will always be in equilibrium with its ions in an aqueous solution, for example: HA (aq) - H+(aq) + A-(aq) The equilibrium constant will thus be given as products over reactants by: Ka is most commonly known as the 'acid dissociation constant'. The pKa is just the pH of the Ka i.e. pKa = -logKa and is used as a quantitative measure the strength of a weak acid in solution. Acetic acid (CH3COOH) is a weak acid and Sodium Hydroxide (NaOH), on the other hand, is a strong base and reacts with Acetic acid (CH3COOH) to produce water (H2O) and a salt (NaCH3OO) as follows: CH3COOH + NaOH --> H2O + NaCH3OO A method called a 'Titration' provides information about the behavior of acids through the pH scale. In a titration, base is gradually added until the acid reaches an endpoint or equivalence point. ...read more.

- 1 x White tile - 1 x Standard Bulb - 50 cm3 bottle of Phenolphthalein indicator (only 4 drops are required) - Paper towels (for cleaning) Figure 2: Conical Flask Figure 3: Burette Figure 4: Mohr Pipette These pictures were all obtained from www.google.com/images General Method 1. Before commencing this experiment it was made sure that all involved in the experiment were wearing the safety goggles and a lab coat to avoid risk of injury (refer to table 3) 2. The Titration was set up as follows, with the clamp holding the burette and the funnel at the top of the burette. The conical flask should be placed on a white tile underneath the burette. The burette should be clamped so that its tip is within the conical flask but above the surface of the solution. Figure 5: Titration set-up 3. The burette was then rinsed with distilled water to ensure that it is clean and to avoid errors 4. Usually experimenters cannot reach the top of the burette when its placed on a lab bench, so as a result, the burette and the burette stand were placed on the ground and Sodium Hydroxide was carefully poured to the first digit on the top of the burette (usually 0) ...read more.